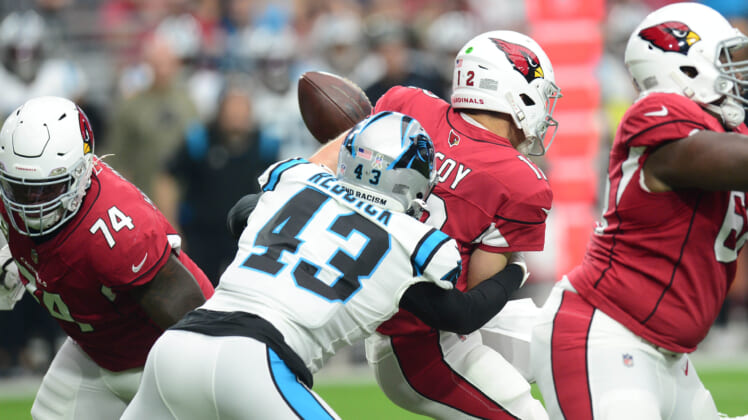 The Philadelphia Eagles were expected to target an edge rusher with one of their three first-round picks in the 2022 NFL Draft.

While that might still be the case, the team’s activity on the first day of the NFL free agent tampering period could suggest otherwise.

General manager Howie Roseman and Co. went out there and signed star edge rusher Haason Reddick away from the Carolina Panthers. Reportedly, the deal is valued at $45 million over three seasons.

We have to give Roseman a ton of credit for going out there and targeting a position of need with the limited amount of cap room the Eagles had heading into the week.

Despite earning a playoff spot a season ago, Philadelphia’s defense was questionable. It ranked 18 in the NFL in scoring and recorded a mere 29 sacks in 17 games. That’s just not going to cut it.

Defensive tackle Javon Hargrave joined edge guy Josh Sweat in leading the Eagles with 7.5 sacks. Not a single member of the Eagles’ defense after those two recorded more than 3.5 quarterback take downs.

What the former Temple product has done the past two seasons is eye-opening given the fact that he was previously seen as a bust with his original Arizona Cardinals team.

A first-round selection back in 2017, Reddick recorded a mere 7.5 sacks in his first three NFL seasons.

There was a lot made out of the Cardinals playing him out of position. Once he transitioned to his more natural edge spot, Reddick started perforing up to his billing as a first-round pick.

Philadelphia Eagles are now not limited in the 2022 NFL Draft

Philadelphia boasts the 15th, 16th and 19th overall selections in the 2022 NFL Draft. Previously, we had the team going edge rusher with one of those selections.

While that might still be the case, Roseman and Co. are now longer pigeonholed. It can target other positions of need while finding better value. That includes wide receiver, linebacker, cornerback and safety.