Three years removed from drafting Zach Wilson with the second pick in the 2021 NFL Draft, the New York Jets will reportedly be one of the most aggressive teams in the 2023 quarterback carousel this offseason.

Wilson struggled in two seasons as the starter, never finishing either year with a completion rate above 56% and being benched twice in 2022. While the franchise is tentatively committed to keeping him, he will be the backup quarterback next season.

Trading up for one of the top 2023 NFL Draft QB prospects is unlikely, especially for a franchise in win-now mode. As a result, New York is expected to either trade for a high-end starter or land one of the best NFL free agents in 2023.

Appearing on SportsCenter, ESPN NFL insider Jeremy Fowler noted on Sunday that the Jets will “scour the Earth” for a new quarterback this offseason. No longer in rebuilding mode, the front office is focused only on quarterbacks who can immediately put this team over the top. 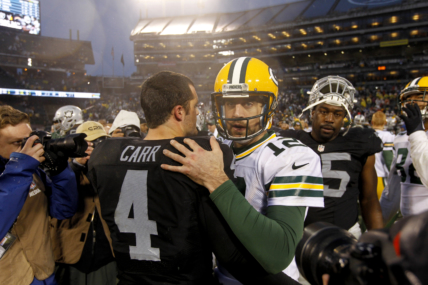 Future Hall of Fame inductees Aaron Rodgers and Tom Brady will likely be at the top of the Jets’ wishlist. While both quarterbacks are contemplating retirement, the expectation is they will play in the 2023 season.

However, Brady will be fielding offers from the Las Vegas Raiders and Tampa Bay Buccaneers. Given his preference to play in a warmer climate, New York might have to explore other options. Rodgers could be available, but the Green Bay Packers asking price in a trade is significant.

If Rodgers and Brady are off the table, trading for Las Vegas Raiders quarterback Derek Carr becomes the next viable option. He is a three-time Pro Bowl selection and would be the best Jets’ quarterback in more than a decade. However, his track record playing outdoors and some concerns about his inconsistency in December and January might be an issue for a playoff contender playing at MetLife Stadium.

It leaves Jimmy Garoppolo as the fallback option. While the success of Brock Purdy in the San Francisco 49ers’ offense hurts Garoppolo’s appeal in free agency, head coach Robert Saleh is familiar with him.

The Jets have the weapons and defense to compete for a playoff spot and a quarterback who protects the football and makes quick, accurate throws could help end their postseason drought.

As for Lamar Jackson, the Baltimore Ravens intend to keep him in 2023. If he becomes available, though, teams like the Carolina Panthers and Atlanta Falcons can offer more than New York.