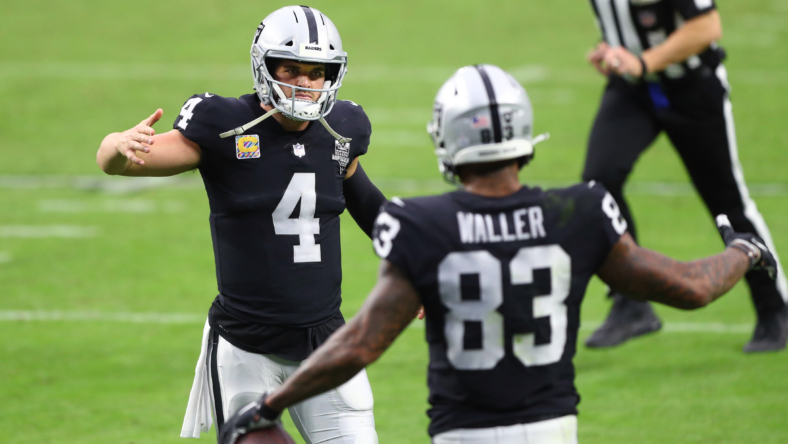 The Raiders, who are 2-6, will play out the 2022 season, but they have their minds set on the future, beyond this year. Going forward, the club will make most of its moves through a long-term lens.

With the playoffs out of reach, the Silver and Black had no reason to rush its high-paid injured players back to action, which is why the club placed Renfrow (oblique) and Waller (hamstring) on injured reserve.

Because of Waller’s recent injury history, we may not see him on the field again this season. Vegas will likely cover the highest-paid tight end ($15 million average annual value) in bubble wrap and hope he comes back at full strength in 2023. Foster Moreau will have plenty of opportunities to boost his market value before he becomes a free agent next offseason.

Through the first nine weeks of the season, wide receiver Mack Hollins has outplayed Renfrow when both took the field together.

Hollins is second on the team in receiving yards per game (49.8) and averages a team-leading 14.2 yards per catch. Meanwhile, Renfrow fumbled three times within the first two weeks (before his injuries started to pile up) and lost one crucial possession in an overtime loss to the Arizona Cardinals. He’s averaging a career-low 6.6 receiving yards per target.

Like Waller, Renfrow signed a new deal this past offseason, a two-year contract worth $31.7 million. Hollins signed a one-year deal; the Raiders may want to see if he’s a keeper beyond this year as one of their top three wide receivers.

Abram isn’t the sole reason that the Raiders have a bottom-tier defense in points and yards allowed. In fact, this season, under defensive coordinator Patrick Graham, he allowed zero touchdowns and a 92.2 passer rating in coverage, which is his career best. The Raiders let him go because they had no plans to re-sign him in 2023, so the front office jumped off to a head-start in its cleanup on the defensive side of the ball. The club did the same with defensive tackle Johnathan Hankins, whom they traded to the Dallas Cowboys a couple of weeks ago.

Do you see it now?

Head coach Josh McDaniels will stand at the podium and tell everyone how the Raiders will continue to compete this season, which is true, but general manager Dave Ziegler has already started to reconstruct the roster for the future. Don’t be surprised if the team releases more players who logged a decent number of snaps in favor of new faces in the coming weeks.

What about Derek Carr?

Carr isn’t in competition with Jarrett Stidham for the starting quarterback job; the team’s draft position will impact his future.

If the Raiders finish the 2022 season with a top-10 pick, they’ll probably discuss a quarterback because for the most part, the draft is about value, especially for teams outside of a Super Bowl window. If a general manager can get a top quarterback prospect on a team without a definitive long-term starter at the most important position, he’s going to consider a signal-caller with a high draft selection.

This year, fans will toss around the names of Bryce Young (Alabama) and C.J. Stroud (Ohio State) if they declare for the 2023 NFL draft. Will Levis (Kentucky) and Hendon Hooker (Tennessee) will garner first-round buzz early in the draft process as well.

If Carr wants to play out his contract in a Raiders uniform, it’s in his best interest for Vegas to win more games, which would drop the team’s draft pick from No. 3 overall, making it more difficult for the Raiders to draft a top quarterback prospect without a move up in the selection order.

Despite what you hear and see on social media, the Raiders aren’t a guaranteed lock to draft a quarterback with a top-10 pick, though that will probably be in the discussion behind closed doors. They could also take a blue-chip prospect to strengthen their 27th-ranked scoring defense. Other than Crosby, who’s a standout player on that side of the ball under contract beyond 2022? 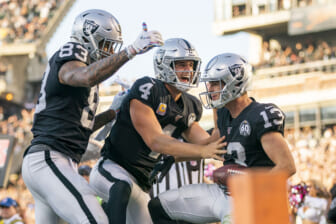 As Raiders fans debate whether or not the team takes a quarterback, a defensive player or a tackle with its first 2023 draft pick, a lot depends on where the club drafts in order (top three, top five, top 10 or outside the top 12?), and who’s available? That’s not the buzzworthy response that will capture traction on the internet, but those factors will dictate Ziegler’s draft plans along with his moves in free agency.

For now, as the Las Vegas Raiders place banged-up players on injured reserve, which will allow backups and younger guys to develop over the next two months, they’ve entered full evaluation mode.

As Ziegler said in Sarasota, Florida last week, the team will continue “figuring out what the fits are, what your strengths are as a team” as a top priority. For the remainder of the 2022 season, expect the Silver and Black to place a heavy focus on player development and finding the right pieces for next season.