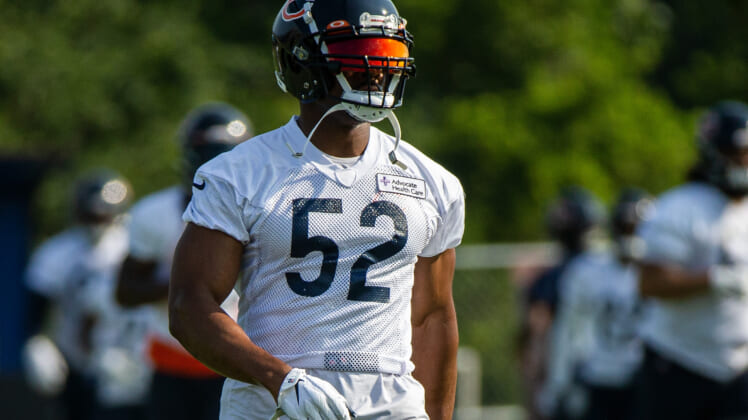 Khalil Mack is headed back to the AFC West as a member of the Los Angeles Chargers. In yet another blockbuster NFL trade during the early portion of the offseason, the three-time All-Pro performer was dealt from the Chicago Bears on Thursday for a second-round pick in 2022 and sixth-round selection in 2023.

NFL Media’s Ian Rapoport was the first to report the details of the blockbuster trade. There’s a lot that goes into this deal from both an on-field and financial perspective. So, let’s break it down some.

This is the most obvious takeaway from Thursday’s blockbuster. By adding Mack to the mix, Chargers general manager Tom Telesco is making it clear he plans on going after elite AFC West quarterbacks in 2022 and beyond.

The addition of Mack comes just a couple days after the division-rival Denver Broncos acquired future Hall of Fame quarterback Russell Wilson in a trade with the Seattle Seahawks. With both Patrick Mahomes and Derek Carr also existing in the division, the goal is to make their jobs more difficult.

Mack, 31, now teams up with fellow Pro Bowl EDGE rusher Joey Bosa to form one of the best pass-rush tandems in the NFL.

Prior to suffering through an injury-plagued 2021 campaign that saw him miss 10 games, Mack was legitimately considered one of the best all-around pass rushers in the NFL. If he can return to form, it will be a boon for the Chargers. Remember, Bosa himself has racked up 129 quarterback hits and 58 sacks in six NFL seasons en route to earning four Pro Bowl nods.

New Bears general manager Ryan Poles heads into his first NFL Draft in that role without a first-round pick. Chicago’s previous regime dealt it away to the New York Giants in a trade last spring that ultimately landed the Bears quarterback Justin Fields during the 2021 NFL Draft.

By picking up a second-round selection this spring, Chicago will have an opportunity to expedite its rebuild. This is where it’s going to be key for the Bears under Poles. That is to say, building through the draft. Chicago now boasts the following draft capital in the 2022 Draft following the Khalil Mack trade.

The finances of the Khalil Mack trade

Chicago eats a whopping $24 million in dead money for next season by moving off Mack. It’s a clear indication that draft picks heading to the Windy City were the primary motivation for the trade from Poles’ perspective.

Following the trade, Chicago now finds itself $28.97 million under the 2022 NFL salary cap. The team did save north of $6 million by trading Mack.

From Los Angeles’ perspective, Mack will count $17.75 million against the team’s cap in 2022. Prior to this move, the Chargers boasted the fifth-most cap room in the NFL at $45.53 million. Re-signing wide receiver Mike Williams to a three-year, $60 million contract earlier in the week took up a nice amount of Los Angeles’ cap room.

As you can see, it doesn’t come without a financial risk for Los Angeles given Mack’s age and the injuries he suffered through a season ago. The Chargers can get out of his contract following the 2022 season while saving $11.3 million against the cap.