Winners and losers from J.J. Watt signing with the Arizona Cardinals 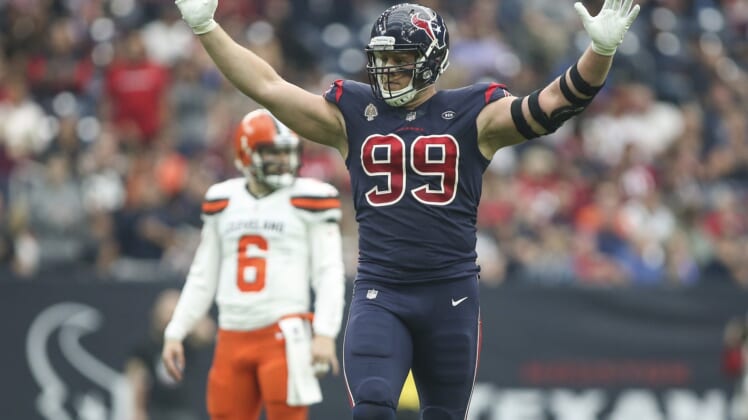 It’s official. J.J. Watt has signed with the Arizona Cardinals on a two-year, $31 million contract. It comes as an absolutely huge shock as Arizona was not among the teams bandied about after Watt’s release from the Houston Texans.

This represents a dramatic shake up in the ultra competitive NFC West. Assuming that the Cardinals retain Chandler Jones, they will now have the best pass-rush tandem in the NFL. That’s not good news for quarterbacks Jimmy Garoppolo, Matthew Stafford and Russell Wilson in the division.

Meanwhile, J.J. Watt joins his former Houston Texans teammate in DeAndre Hopkins with the Cardinals. That has to be a bitter pill for fans in Houston to swallow. These are among the winners and losers following Monday’s momentous news.

This one seems to be rather obvious. Despite missing Chandler Jones for all but five games a season ago, Arizona was still able to rack up 48 sacks. While rumors indicate Jones could be a cap casualty, it makes sense for the Cardinals to pair him with Watt.

Since the start of the 2012 season, Jones leads all NFL pass rushers with a combined 97 sacks. J.J. Watt comes in second in that category with 95.5 quarterback take downs. After the Texans struggled providing Watt any help out on the edge last season, he now joins one of the most-elite pass rushers of this generation. That could allow the three time NFL Defensive Player of the Year to return to 2018 form when he recorded 25 quarterback hits, 16 sacks and a league-high seven forced fumbles.

Again, this one seems to be pretty darn obvious. We already know that Wilson is upset about the Seahawks’ inability to provide him with decent pass-protection. Said unhappiness includes a backdrop that could see Seattle trade its Super Bowl-winning quarterback.

After being sacked a resounding 146 times over the past three seasons, Wilson will now face elite pass rusher after elite pass rusher within the NFC West. That includes J.J. Watt in Arizona, Nick Bosa with the San Francisco 49ers and Los Angeles Rams star Aaron Donald. Add in Chandler Jones, and Wilson has to be considering running for the hills. It has not been a great couple weeks for the future first ballot Hall of Famer.

The market dynamic changed big time for this impending free agent following the decision J.J. Watt announced on Monday. Already looking at north of $18 million annually on the open market, Williams gained a ton of negotiating power with the 49ers. Simply put, they now can’t afford to lose the future Hall of Famer once NFL free agency opens and expect to remain competitive in the NFC West.

Williams, 32, dominated big time in his first season with San Francisco after being acquired from the Washington Football Team. He’s earned a trip to the Pro Bowl in each of his past eight seasons suiting up in the league. The former No. 4 pick is still in his prime. That will lead to the cash-strapped 49ers likely having to dole out $20-plus million annually to retain the key free agent.

The decision by then-general manager Bill O’Brien to trade DeAndre Hopkins to the Cardinals last offseason threw the NFL world for a loop. Given what Houston received in return, it also didn’t sit well with fans in Houston. Now, one year later, and there’s a chance that Texans fans will be without Hopkins, Watt and Deshaun Watson. Let that sink in for a second.

We’re talking about three likely future Hall of Famers, all potentially departing the Texans within a calendar year. Watt himself was not just the face of the organization, he was a key member of the community in Houston. The ultimate professional. Seeing him team up with Hopkins in another city is nothing less than a gut-punch for Texans fans.