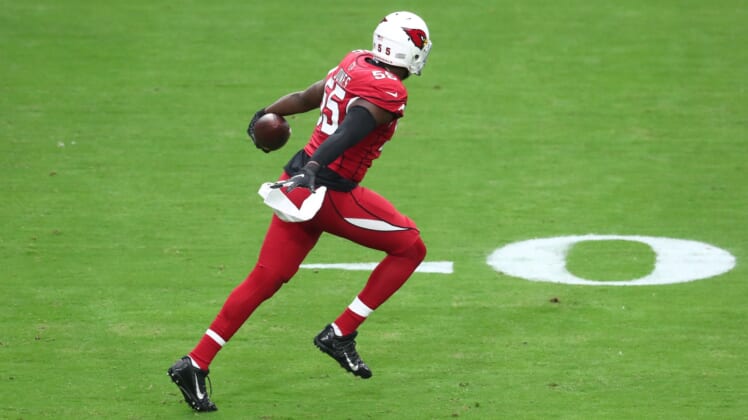 The Arizona Cardinals, like every NFL team, face some difficult decisions this offseason due to the looming drop in the 2021 salary cap. While significant changes could be coming for the desert this spring, edge rusher Chandler Jones likely won’t be one of the cap casualties.

Arizona is projected to have approximately $20 million in cap space available this offseason, even less when factoring in salaries for their 2021 NFL Draft picks. Big moves will be made on both sides of the ball, with Kenyan Drake and Patrick Peterson both likely to depart. With so many needs on the roster, some around the NFL started suggesting that Jones could be released this offseason.

While cutting an All-Pro edge rusher might seem unthinkable, the unprecedented dip in the salary cap is forcing teams to move on from players who make a significant impact on the field. Fortunately for this fan base, it seems Jones may be staying in the desert.

During an interview on Arizona Sports’ 98.7 FM, Cardinals general manager Steve Keim rejected the idea that Jones would even be considered a cut candidate this offseason.

While that still leaves open the possibility of a trade, Keim indicated that an extension would be more likely for the talented pass rusher. Jones carries a $20.8 million cap hit this year and moving on from him would create $15.5 million in cap flexibility. However, extending his contract and pushing some of the money into future seasons might free $10 million in space.

Jones tore his bicep in October, forcing him to miss a majority of the 2020 season. Even before the surgery, he wasn’t quite himself with only one tackle for loss and one sack in five games. Before that, Jones had recorded 13-plus sacks and 18-plus quarterback hits in each of his previous three seasons.

From a talent perspective, the Cardinals can’t afford to lose Jones. If he is fully healthy, even entering his age-31 season, we’re still talking about one of the best edge rushers in the NFL. Arizona’s secondary is also one of the worst in football, meaning this defense can’t afford to lose one of the few players who can make life difficult for opposing quarterbacks.

Contract extensions for veterans might be a popular move this offseason. The NFL is closing in on record-breaking TV contracts, deals that will send the salary cap soaring back up in 202. Pushing money back into future seasons will help organizations soften the financial blow this year. Additionally, the incoming revenue from broadcasting deals will allow teams to handle the increased cap charges in the coming years.

In the end, expect Chandler Jones to be leading Arizona’s defense next season.