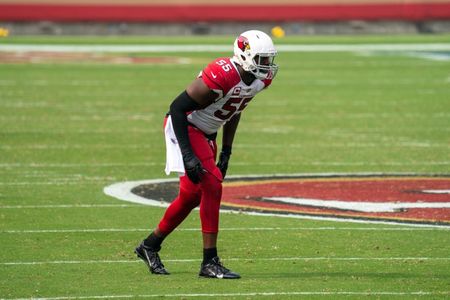 Arizona Cardinals All-Pro defensive end Chandler Jones proved to be one of the most-dominant pass rushers in the NFL from 2013-19 before suffering a biceps injury five games into the 2020 season.

While there’s a lot of talk about high-priced NFL players being available, either via release or the trade block, nothing has come up regarding Chandler’s future status with the Cardinals. Until now.

“An elite pass rusher and three-time Pro Bowler, Jones last year suffered a biceps injury that ended his season after five games. Before the injury, Jones had not missed a game in four years,” The Athletic noted on Tuesday. “Entering the final year of his contract, Jones still can return to form, but he turns 31 in February and the Cardinals have a lot of needs.”

This would obviously be a shocking move on the Arizona Cardinals part. Since being acquired in a blockbuster trade with the New England Patriots back in 2016, Chandler Jones has recorded 105 quarterback hits and 61 sacks in 69 games. Back in 2019, the former first-round pick led the NFL with eight forced fumbles while recording 19 sacks.

Why would the Arizona Cardinals release Chandler Jones?

It’s all about the economy. Cutting the soon-to-be 31-year-old defensive end would save Arizona a whopping $15.5 million against the 2021 NFL salary cap.

The Cardinals currently find themselves $18.2 million under the cap with a ton of priority free agents to consider re-signing and not much more wriggle room to create cap space. That’s important to note given that Arizona has holes to fill all over the field after a disappointing eight-win 2020 season.

Among those Arizona Cardinals players set to hit NFL free agency next month, longtime veterans Larry Fitzgerald and Patrick Peterson could be priorities.

Meanwhile, running back Kenyan Drake as well as linebackers De’Vondre Campbell, Markus Golden and Haason Reddick should have relatively big markets for their services.

The likelier scenario than outright releasing Jones would be a trade. Arizona could land some draft pick compensation in return while freeing up money to re-sign younger pass rushers in Golden and Reddick. It’s something to keep an eye on.