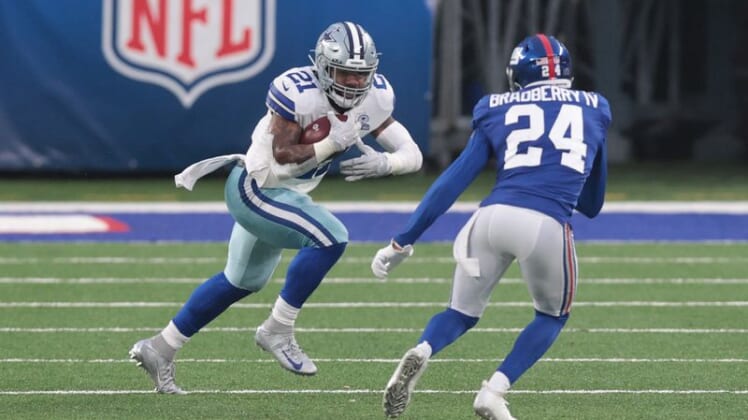 NFL trades will be a part of this unusual offseason. Heck, we have already seen one major blockbuster go down. There’s a major reason for this. Several teams find themselves in less-than-stellar cap situations due to the economic downturn brought on by COVID-19.

Right now, a dozen teams are over the estimated $185 million NFL salary cap for the 2021 season. That includes the New Orleans Saints sitting at $65-plus million over the cap. Could this mean that Michael Thomas will be traded in a cost-cutting move?

Another team in that of the Dallas Cowboys could potentially look to find a taker for Ezekiel Elliott with Tony Pollard being a cheaper in-house alternative. Ignoring the quarterback position for a second, what high-priced NFL players might be dealt this season?

After a record-breaking 2019 season that saw him put up 149 receptions for 1,725 yards, Thomas fell back down to earth this past season. He missed all but seven games to injury, finding himself involved in some drama with the Saints’ organization. It led to some speculation about a potential trade. In the end, Thomas recorded just 40 receptions in seven games.

Playing under a five-year, $96.25 million extension he signed back in 2019, Thomas won’t be easy to move. As for the Saints, they’d take an $23 million dead cap hit by trading Thomas. However, that could be spread out throughout the remainder of his contract. A move of this ilk would save the cash-strapped team in the neighborhood of $11.5 million this coming season.

A number of teams would be interested in Thomas. At $72.89 million under the cap and boasting two first-round picks, the New York Jets might come into play. Whoever is under center under first-year head coach Robert Saleh would like nothing more than to throw passes to Thomas. With T.Y. Hilton potentially set to depart in free agency, the Indianapolis Colts could be interested, too.

This is one of many NFL trades we expected to happen ahead of the November deadline. There’s no reason to believe that New England will hold on to the former NFL Defensive Player of the Year. It needs to find more talent on offense, either via a trade or the draft. That’s as clear as day.

The 30-year-old Gilmore is set to count $15.01 million against the cap in 2021. Any team acquiring him from New England would be on the hook for a mere $7 million base salary. That makes Gilmore an extremely valuable target on the trade market with the offseason getting going.

The San Francisco 49ers are going to lose Richard Sherman in free agency. Fellow cornerbacks Jason Verrett, Ahkello Witherspoon, Emmanuel Moseley and K’Waun Williams are also set to hit the open market. Perhaps, a Gilmore trade to San Francisco for a package including Jimmy Garoppolo could be in the cards here?

Sitting at $8.54 million over the cap, it’s reasonable to believe that Minnesota is going to move on from the likes of Kyle Rudolph, Riley Reiff and Harrison Smith this offseason. However, the team is going to have to make other moves in order to be seen as legit playoff contenders next season.

Barr is a prime candidate to be involved in one of the biggest NFL trades this offseason. Minnesota has a cheaper alternative in Eric Wilson to replace him. Meanwhile, Barr would draw a ton of interest on the open market two years after re-signing with the Vikings on a five-year, $67.5 million contract.

The Vikings would save roughly $8 million against the cap in 2021 by trading Barr. In turn, any team making a move for the four-time Pro Bowl linebacker would be on the hook for a mere $12.3 million hit. Of the teams with the cap space to make this work, the Miami Dolphins seem like an ideal fit. They will be in search for linebacker help. Miami could also offer up one of its two second-round picks to entice Minnesota.

With an average NFL salary of $18 million and coming off a torn ACL, Beckham Jr. will not be easy to trade. In no way does this mean Cleveland won’t do its best to move the former Pro Bowl wide receiver. Simply put, Baker Mayfield played much better last season when OBJ went down to injury.

Having put up more than 1,000 yards in five of his first six NFL seasons, Beckham Jr. could be a trade target for teams looking to improve at wide receiver. Sure it wouldn’t land the Browns huge draft pick compensation, but it would be among the biggest NFL trades this offseason.

Of those with a ton of cap room, I would not be surprised if the New England Patriots looked to catching lightning in a bottle with OBJ. We already know that they need a lot of help at the skill-positions regardless of what happens at quarterback. Perhaps, the Green Bay Packers also show renewed interest in the receiver to team up with Davante Adams.

Dak Prescott will be up there as the highest-paid quarterback in the NFL once he inks a new deal with the Cowboys. That should come in at about $40 million annually. If Prescott is forced to play under the franchise tag, it would cost Dallas about $35 million. Heck, the team would have to pay a huge price for another signal caller should Prescott and the Cowboys part ways.

What does that all mean? A team that’s currently $20 million over the cap, the Cowboys simply can’t afford to pay Elliott less than two years after signing him to a six-year, $90 million extension. This is especially true with a cheaper alternative in that of Tony Pollard having impressed big time last season.

The question here is whether any team would be willing to give the Cowboys assets while taking on his contract? It’s possible. Said team would only have to pay out $9.6 million in 2021. And while the Cowboys would be forced to take on a $24.5 million dead cap hit, that could be spread out over the next several years — saving Dallas roughly $10 million 2021. Purely hypothetical, but the Dolphins could make a lot of sense for Elliott.