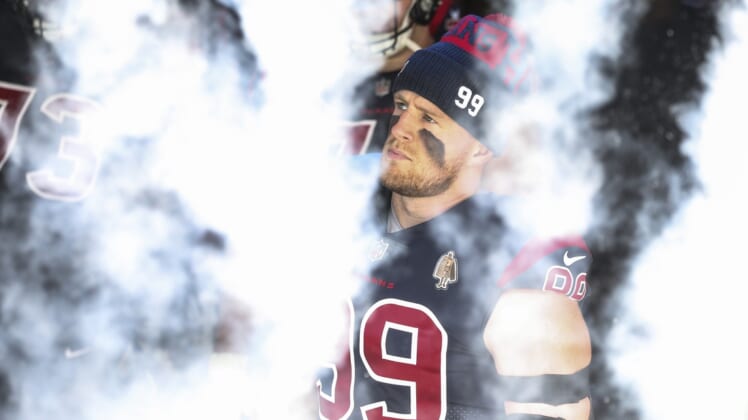 Who knew that three-time NFL Defensive Player of the Year J.J. Watt had a flair for the dramatic? Even since he was released by the Houston Texans early in the offseason, the future Hall of Famer has been cryptic about his next destination.

That changed on Monday when Watt took to social media to announce that he has indeed opted to sign with the Arizona Cardinals. He did it in the best possible manner.

This comes out of left field. It was noted recently that the Green Bay Packers, Cleveland Browns and Buffalo Bills were favored to land J.J. Watt.

These Cardinals were not bandied about as a logical landing spot. That’s until Arizona offered Watt a massive two-year, $31 million contract. It changed things on a dime.

One of the most-dominant pass rushers of his generation, Watt has fallen on hard times recently. Injuries coupled with the Texans’ inability to provide a pass rush from the other side of the line has limited him to 38 quarterback hits and nine sacks over the past two seasons.

Prior to that, he was absolutely dominating. Back in 2018, Watt recorded 25 quarterback hits, 16 sacks and seven forced fumbles. It represented the fourth time in his career that Watt had recorded 16 sacks or more. Just insane stuff.

As a team, Arizona was able to put up 48 sacks a season ago despite Chandler Jones missing all but five games to injury. Watt should be in a better position than what we saw with the Texans last season, likely leading to more of a 2018-like performance. It also helps that he joins form Houston teammate DeAndre Hopkins in the desert.

As noted, Watt earned a two-year, $31 million deal with Arizona. A total of $23 million is guaranteed, pretty much locking him up to the Cardinals for the next two seasons.

Prior to this move, Arizona was an estimated $16.34 million under the cap. Obviously, signing J.J. Watt will eat into that a whole heck of a lot.

Previous NFL rumors suggested that the Cardinals could opt to trade or release Chandler Jones after an injury-plagued 2020 season. Said move would save Arizona about $15.5 million against the cap. Interestingly enough, that’s about the figure Watt is set to earn on an annual basis with the Cardinals.

It appears that Arizona is going all in with quarterback Kyler Murray on his rookie contract. It will now be interesting to see what the team plans to do once NFL free agency opens later in March. This could be a sign that the team will be aggressive.

For now, J.J. Watt heads to the Arizona desert.