10 fantasy football players who should rebound in Week 4, including Tom Brady

After an exciting and surprising slate of games and some poor player performances, let’s look at the following fantasy football players who tanked your teams, but should rebound in Week 4. Here, we will comb through what went wrong and see how some of our star fantasy players can recover.

Those who roster the following fantasy football players may be coming up short in points each week. So, let’s look for a few star quarterbacks, as well as some top fantasy RBs and WRs who have been struggling, to rebound in NFL Week 4.

It’s about darn time for Tom Brady to deliver the top fantasy performance he was drafted for, right? Brady has been a major let down and currently ranks at QB27. Yuck.

In Week 4, let’s look at Brady to rebound in a “Sunday Night Football” game against the Kansas City Chiefs. Brady will have Mike Evans back and could see Julio Jones return Kansas City has surrendered the 11th-most fantasy points to quarterbacks and this game has barn-burner written all over it.

While Kyler Murray passed for 314 yards last week, he failed to hit pay dirt in the end zone. Look for the game scrip to shift as Murray attempts to score against a Panthers defense that has given up two rushing touchdowns and three through the air on the season. Start Murray as a QB1 in Week 4 with confidence.

Let’s give Russell Wilson one more chance to deliver top fantasy points in Week 4. He has a cupcake matchup against a Las Vegas Raiders defense that has allowed the sixth-most fantasy points to quarterbacks on the season. Vegas’ defense has been getting destroyed through the air and has given up 277.3 passing yards per game.

Wilson is armed with an elite cast of wide receivers and running backs. There are no more excuses. 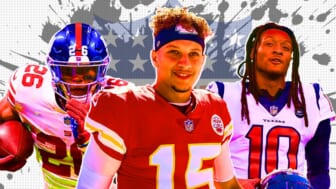 Ekeler’s fantasy stats are nowhere near that of his stellar 2021 season. This needs to change. Said change could be coming in Week 4 when Ekeler is a top fantasy start against the Houston Texans.

To date, the Texans have yielded the second-most fantasy points to running backs. That includes yielding 478 rushing yards in three games. Coming off an embarrassing loss to Jacksonville, expect the Chargers to get their key playmaker heavily involved.

Jones came up short in Week 3 against a Tamp Bay Buccaneers defense that has allowed the second-fewest fantasy points to running backs in three games. Next up, look for a rebound fantasy performance against the Patriots, who could struggle without starting quarterback Mac Jones.

If the game favors the Packers, it means more touches for both Aaron Jones and A.J. Dillon in Week 4.

Many were hesitant about starting Kamara returning from a rib injury and facing a bothersome Panthers defense. His poor fantasy points showed for it.

Let’s sweep that under the rug and start Kamara in Week 4 against the Vikings. Minnesota is currently allowing the fourth-most fantasy points to opposing running backs. Kamara should fully take advantage.

In what should be a more competitive game for Sanders in Week 4, he is a start against the Jacksonville Jaguars. Jacksonville as a whole is going to push for the Eagles to move the ball through the air as well as on the ground.

Sanders is still the top fantasy RB on his team and this game script — versus last week’s blowout win over the Washington Commanders — will see Sanders receive more touches. 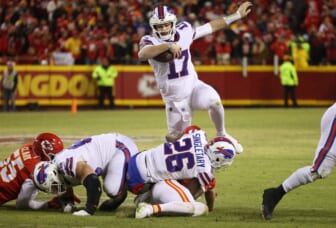 A lousy game against those aforementioned Eagles had the whole Washington offense scrambling in its last game. As such, Samuel failed to score and recorded his lowest yardage total of the season.

Let’s write off this fluke and watch Samuel rebound against the Dallas Cowboys in Week 4. He’s too talented of a player not to keep involved as the Washington Commanders look to get their passing game back on track. It makes Samuel one of the most intriguing fantasy football players of Week 2.

Samuel should see an uptick in fantasy points when the 49ers play the Los Angeles Rams on “Monday Night Football.” The Rams’ defense has given up the second-most fantasy points to its opposing wide receivers. It’s absolutely been obscene!

Remember, Stefon Diggs’ 8/122/1 fantasy stat line from Week 1? Yes! Samuel is primed for a tremendous fantasy performance in Week 4 as a WR the Rams’ defense simply won’t be able to cover.

We are going to throw Adams in this segment again. The Raiders have lost three games and must get the ball to Adams, their key cog, to notch their first win.

Adams is due a fantasy rebound performance when Vegas faces the Denver Broncos in Week 4. With the Raiders in dire straights, Adams and Derek Carr will practice diligently to get their chemistry on track. The good thing is the targets for Adams (34 over three games) are there. Adams and Carr just need to connect moving forward.