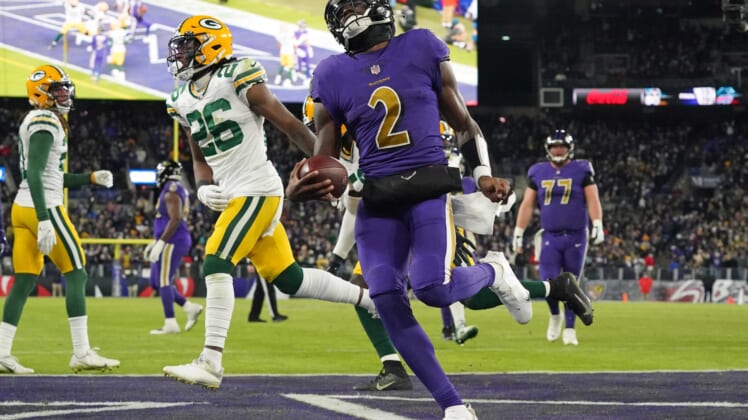 These waiver wire targets are based on their Week 16 matchups as well as their potential to assume larger roles during the playoff stretch.

Tyler Huntley is a legit fantasy quarterback who is a must-add (if available) from the Week 16 waiver wire. If Lamar Jackson misses his next game, Huntley would gain another start. Over his last two weeks covering for Jackson, Huntley has performed better than several regular starting quarterbacks, including all but Patrick Mahomes in Week 15.

Lock is a Week 16 waiver wire pickup to secure in the event Teddy Bridgewater doesn’t make it back to the field for his next game. Fortunately, Bridgewater’s head injury turned out to be not as serious as it looked when he had to be taken from the field via a stretcher in Sunday’s game. Thus, Lock would suffice for a fill-in in dual quarterback leagues or for anyone totally desperate as Week 16 approaches.

Johnson will be a top waiver wire pickup in Week 16 as the running back who stole all of Myles Gaskin’s fantasy thunder in their last game. After recording 127 total yards and two touchdowns, Johnson should continue to be involved in tandem with Gaskin when the Jets head to play the Saints in Week 16.

Jones is a must-add from the Week 16 waiver wire as the lead running back for the next game at the very least. He will fill in for an injured Leonard Fournette and makes for a serviceable RB2 to add to your fantasy lineup.

Abdullah last recorded 48 receiving yards and one touchdown, stemming from four receptions, making him a running back to target from the Week 16 waiver wire in PPR fantasy leagues. For what it is worth, the Panthers will attempt to give it their all which should consist of tons of throwing when an angry Tampa Bay Buccaneers squad comes to town in Week 16.

If Reynolds is still available, grab him from your Week 16 waiver wire. With DeAndre Swift and Jamaal Williams both out again, Reynolds strung together a 117-yard performance in a surprising win over the Arizona Cardinals. If either Swift or Williams sits out next week, Reynolds will easily be startable as a flex against the Falcons come Week 16.

Those in need of a fantasy wide receiver in Week 16 may want to pick up Berrios from the waiver wire. Slightly under the radar, Berrios has had double-digit fantasy points in his last four games. His targets have been sporadic, however, Berrios has a nice matchup against the Jaguars (giving up top-10 WR fantasy points) next on the schedule.

If Kirk is laying around on the Week 16 waiver wire, pick him up. Over his last two games, Kirk has received 18 targets, which have amounted to 180 yards and one touchdown. The Cardinals next play the Indianapolis Colts when Kyler Murray will have to put that arm to use plenty to try to gain a win.

Amon-Ra St. Brown should not be on any waiver wires after three weeks of solid fantasy performances. But if he is, pick him up, ASAP. This guy has been targeted 35 times over his last three games, in which he has scored twice and recorded 249 yards over this stretch. St. Brown should be in all fantasy lineups when the Lions head to Atlanta in Week 16.

After three impressive weeks of fantasy production, including an 85-yard, two-TD performance in Week 15, Davis is a top waiver wire target for Week 16, should he be available. The Bills next face the Patriots when Davis should see plenty of targets while New England tries to shut down Stefon Diggs.