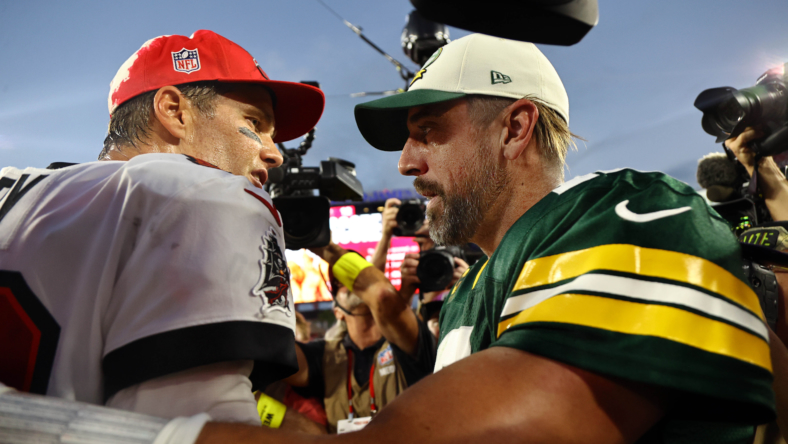 In a matchup of arguably the two greatest quarterbacks of all time on Sunday, Aaron Rodgers bested Tom Brady. Not only did Rodgers and the Packers get the win, but No. 12 in the green and gold showed why he’s the back-to-back reigning MVP. Yes, Rodgers had better statistics than Brady. He had a better QBR (103.9), a better completion percentage (77.1%), and more touchdown passes (2).

In addition to statistics, Rodgers also made his teammates better on Sunday more often than Brady did. Sure, Green Bay only scored 14 offensive points. But Rodgers was able to find more success without the team’s starting receivers than Brady was with his own receivers out.

Green Bay outgained Tampa Bay in total yards (315-285). The reason for that is because Rodgers was able to spread the ball around. Seven wide receivers had multiple receptions. Keep in mind that he did this without Sammy Watkins (on IR) and Christian Watson (hamstring). All-Pro left tackle David Bakhtiari also only played 50% of the snaps as he rotated with Yosh Nijman.

Rodgers, like Brady, was without some of his supporting cast. However, he was able to put up more points against one of the best defenses in the league. Brady didn’t put together a touchdown drive until the end of the fourth quarter, and it still wasn’t enough. Packers fans can thank De’Vondre Campbell for that.

At his disposal, Rodgers had to work with rookie Romeo Doubs, Randall Cobb (missed practice all week with an illness), an injured and puking Allen Lazard, and Juwann Winfree (elevated from the practice squad this week). Sure, Brady was missing the likes of Mike Evans, Chris Godwin, and Julio Jones. But, he still had veterans in Russell Gage, Cole Beasley, Kyle Rudolph, Cameron Brate, and Breshad Perriman.

Both quarterbacks had their running backs at their disposal, but Rodgers had to do more with less when it came to the lack of experience and supposed lack of play-making ability of his receivers. Most notably, Doubs caught all eight passes from Rodgers for 73 yards and a touchdown. With just five wide receivers on the gameday roster, Rodgers did more than Brady, who had more experience among his receivers.

Throughout the entirety of Brady’s career, he has had elite coaching, elite defenses, and a few quality offensive pieces sprinkled in. In the end, defenses win championships. All Brady has had to do is perform his job consistently and manage the game well while coming through with several clutch performances with the game on the line.

Yes, Rodgers has had some elite offenses. Ask Donald Driver, Greg Jennings, Jordy Nelson, James Jones, Jermichael Finley, Randall Cobb, and Davante Adams. But there is a reason why this year’s Green Bay defense continues to get compared to that of the 2010 Super Bowl defense. Rodgers has never had consistent help defensively or from the special teams unit (see Brandon Bostick in the 2014 NFC Championship Game).

Roster construction and overall coaching leadership may be why Brady has more rings than Rodgers. The last time Brady had to do the heavy lifting, it came in Super Bowl LII, where Brady threw for over 500 yards in a loss. Rodgers has seemingly always done more (best TD-INT ratio and QBR of all-time) with less to work with.

On Sunday, Rodgers was able to lift his team on his shoulders more often with his efficiency and timely decisions. It was also one of the better defensive performances he has seen as the quarterback in Green Bay. Brady didn’t have success until the end, and it wasn’t enough. He was not able to overcome an elite defense while lacking a supporting cast as Rodgers did.