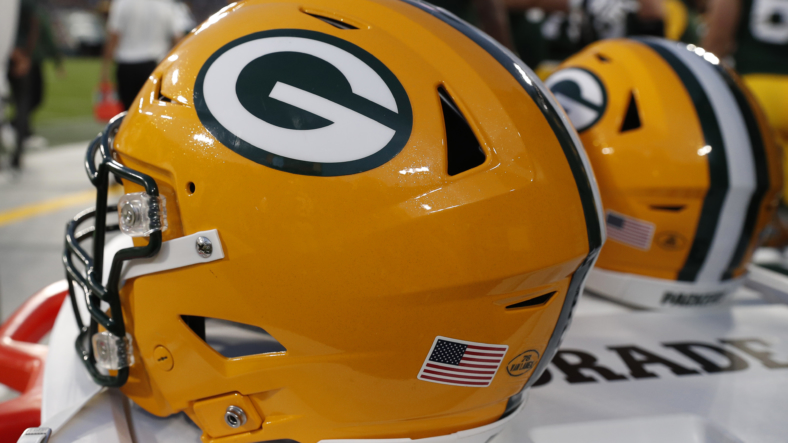 The Green Bay Packers organization is not only one of the greatest in the NFL, but it is one of the greatest in all of sports. They have an NFL record 13 championships (four Super Bowls). The franchise has the most regular wins in NFL history. That is a testament to the all-time great players that have stepped foot on Lombardi Avenue. With that said, let’s take a look at who the 10 greatest Packers players are in their rich history.

Donald Driver is one of the most beloved Packers players of all time. But when you lined up against him on Sundays, you were in for a long day. Driver is Green Bay’s all-time leader in receptions (743) and receiving yards (10,137). The five-time Pro-Bowl selection was inducted into the Green Bay Packers Hall of Fame in 2017 and was a trusted receiver for both Brett Favre and Aaron Rodgers.

He was also a key part of the team’s most recent Super Bowl run in 2010. Driver proved that he is one of the greatest receivers for arguably the greatest franchise in NFL history. Not many players can say that. Thanks to a strong, long-lasting career, Driver deserves a spot among the best Green Bay Packers of all time.

Not many Packers fans today remember the greatness of Paul Hornung, but the 1956 Heisman Trophy winner was one of the greatest NFL players of the early era. He was a five-time NFL champion (won Super Bowl I), the 1961 NFL MVP, and a member of the 1960s NFL All-Decade Team. The Pro Football Hall of Famer was an integral part of Vince Lombardi’s dynasty in Green Bay. A three-time All-Pro, Hornung was a complete game-changer when the ball was in his hands. Hornung is certainly among the Packers football legends.

The recent Pro Football Hall of Fame inductee is one of the great safeties in NFL history and one of the toughest defenders to play against in the 1990s. Leroy Butler was a cornerstone piece during Mike Holmgren’s time as head coach, along with legends Brett Favre and Reggie White.

Butler was a four-time first-team All-Pro, including three straight selections from 1996-1998. He is a member of the 1990s NFL All-Decade Team and helped Green Bay win the Super Bowl in 1996. The safety was an amazing center-field defender who recorded multiple interceptions in every season of his career except for his final season in 2001. He is one of the most underrated defenders in the history of the game due to his consistency and belongs on a list of the best Packers players ever.

The 1997 Heisman Trophy winner had the perfect combination of leadership skills and football instincts. After getting traded from the Oakland Raiders in 2006, the Pro Football Hall of Famer and Packers Hall of Famer would show his greatness in seven seasons with the team from 2006-2012.

Charles Woodson made four All-Pro teams, led the league in interceptions twice (2009, 2011), won Defensive Player of the Year in 2009, and play a key role in the team’s 2010 Super Bowl run. The former Michigan Wolverine had elite coverage skills and all-world instincts. He still holds the NFL record for most consecutive seasons with a pick-6 (6; 2006-2011). Woodson finished his career as one of the greatest defensive players ever (eight All-Pro selections) and one of the all-time Packers GOATs.

Like Hornung, Jerry Kramer is one of the great NFL players of the early era. The seven-time All-Pro guard (five first-team All-Pro selections), helped Vince Lombardi’s squad win the first two Super Bowls. He was a bully in the trenches and paved the way for the run game. Kramer is a member of the NFL’s 50th Anniversary Team and a member of the 1960s NFL All-Decade Team. His pass-protection skills were in a league of their own for over a decade at Lambeau Field. Quarterback Bart Starr doesn’t have a successful career without Kramer up front protecting him and giving him a clean pocket. For that, the offensive lineman deserves a place at the table among the all-time Packers greats.

Don Hutson played from 1935-1945. He still holds many Green Bay Packers receiving records, including receiving touchdowns (99), which won’t be touched for a long time. Hutson’s portfolio is absolutely loaded. The three-time NFL Champion and eight-time first-team All-Pro was also a two-time league MVP. Wide receivers are never in the MVP running today, but Hutson was.

Hutson was an absolute game-changer for coaching legend Curly Lambeau and was the definition of a machine in his 11-year career. He led the league in receptions eight times, receiving yards seven times, and touchdown receptions nine times. He is one of the most prolific Packers of all time regardless of position.

The late-great Reggie White changed the NFL when he came to Green Bay as a free agent in 1993. From 1993-1998, White made six All-Pro teams, helped Green Bay win the Super Bowl in 1996, and he also earned Defensive Player of the Year in 1998. His power and strength simply made him one of the five greatest defenders in NFL history. The Pro Football Hall of Famer recorded 68.5 sacks for the Packers, including 16 in his dominant 1998 season. The best way to describe him is a ridiculously productive force of nature. He is a member of both the 1980s and 1990s NFL All-Decade Team. White is the best Packers defender in NFL history.

Brett Favre is the definition of football. At the time he retired in 2011, he held every major statistical passing record in NFL history, including passing yards and passing touchdowns. He was beloved because of the character that he was on the field, as well.

Favre’s “gunslinging” mentality and his toughness were what made him unique. His record for most consecutive NFL starts (327, including playoffs) will not be broken for a long, long time. His stretch from 1996-1998 was one of the most dominant stretches in NFL history when the legendary quarterback won three consecutive MVPs and a Super Bowl MVP. The 11-time Pro-Bowl selection and six-time All-Pro is one of the greatest, most electrifying quarterbacks in NFL history. Nobody knows that better than Packers fans.

Bart Starr was one of the best leaders and signal-callers of his era. No. 15 was arguably the best and most important player that Vince Lombardi ever coached. Starr earned MVP honors in Both Super Bowl I and II. The accuracy and artistry that he showed while throwing the football were unheard of.

He led the NFL in completion percentage and passer rating four times. The 1966 MVP was one of the first true, great offensive generals in NFL history. If Bart Starr doesn’t come along, Green Bay doesn’t have a dynasty in the 1960s.

Aaron Rodgers is not slowing down at all. The four-time NFL MVP and Super Bowl winner is one of the most talented quarterbacks of all time. He has the greatest TD-INT ratio in history (4.83-1). He is the back-to-back reigning MVP after throwing 85 touchdowns and just nine interceptions. Rodgers does not turn the ball over (lowest interception percentage in history at 1.3%).

No. 12 is the best quarterback in Green Bay’s history and is arguably the greatest in NFL history. Rodgers is top 10 all-time in passing yards, passing touchdowns, completed passes, and completion percentage. His ability to draw the defense offsides or catch them with too many men is innate. Rodgers is the longest-tenured player in Packers history (currently in his 18th NFL season). The Packers simply are not what they are over the last 15 years without him. As long as this team has Rodgers, they have a chance to win it all.