Tom Brady or Aaron Rodgers? Debating the greatest quarterback of all time 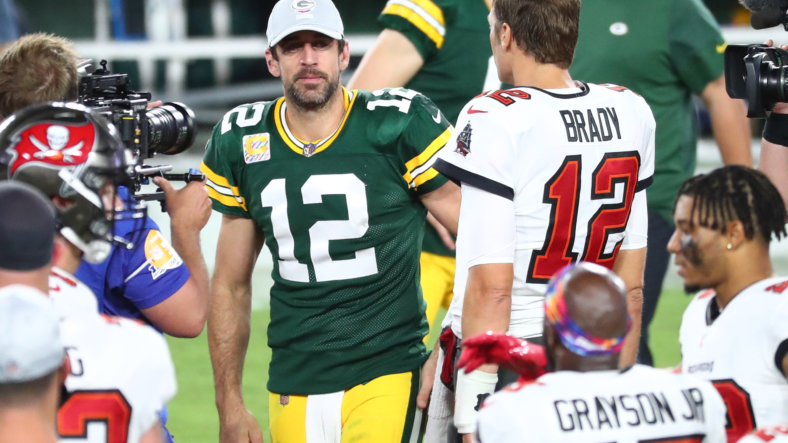 On Sunday afternoon in Tampa Bay, NFC powers in the Green Bay Packers and the Tampa Bay Buccaneers will meet. This means that arguably the greatest quarterbacks of all time, Aaron Rodgers and Tom Brady, will meet for just the fifth time in their illustrious careers.

This is the first time that these teams will be meeting since the 2020 season, where Tampa beat Green Bay twice (once in the regular season and once in the postseason). These teams are a bit different this time around.

For Green Bay, there is no Davante Adams, but their defense is even more talented. For Tampa Bay, Bruce Arians is no longer the head coach, and Pro Bowl wide receiver Mike Evans is suspended one game due to his involvement in a brawl that took place against the Saints on Sunday.

Regardless, the headline is Tom Brady vs Aaron Rodgers. Two of the most legendary quarterbacks of all time. But which quarterback is the better quarterback? Let’s break it down.

Tom Brady is the ultimate winner

Tom Brady is known for one thing. Super Bowls. He has a record seven Super Bowl rings. He has been to 10 Super Bowls in his 22-year career. His statistics are in a different stratosphere. Brady holds many all-time records, including wins (245), completions (7,299), passing touchdowns (626), and yards (84,922). He has had a storied career.

However, the argument could be made that Brady played for the greatest coach of all time in Bill Belichick and has had elite defenses consistently throughout his career. Brady has never won a Super Bowl with a team that finished no worse than eighth in scoring defense.

Also, think about some of the key plays that the Patriots made in big moments before Brady went to Tampa. The Malcolm Butler interception against Seattle. The Julian Edelman diving catch on a tipped ball against Atlanta. What about the Patriots’ defense holding Sean McVay’s Rams to three points in the last Super Bowl win for New England? What about the Bucs defense sacking Aaron Rodgers four times and picking him off twice in the 2021 NFC Championship Game?

There is no doubt that TB12 is an all-time great competitor and an all-time great winner. He has all of the characteristics a coach wants in a franchise quarterback. The arm strength, football IQ, vision, and accuracy are all there.

However, a very compelling case could be made that he was not the biggest reason why the Patriots and now-Bucs have been so successful. Was he just a very good game manager playing on some of the best rosters with great coaching in the league over his career? It is a fascinating debate. What’s not up for debate is his legendary status.

Obviously, Aaron Rodgers is not the winner that Tom Brady is. He only has one Super Bowl win, and it came over a decade ago. But he is a more talented player, as well as a better performer statistically.

Rodgers doesn’t hold the all-time career records like Brady does. He didn’t play for the first three years of his career and is six years younger. But he does have some ridiculous stat marks that are undeniable.

He has the two highest-rated passing seasons of all time (2011, 2014). His TD-INT ratio is in a different stratosphere (NFL record of 4.83-1). That is ridiculous because he has a chance to throw his 500th touchdown pass before his 100th interception. He has the lowest career interception percentage of 1.3%. He is somehow the most efficient quarterback of all-time while also being one of the most prolific quarterbacks ever.

Rodgers is by all accounts one of the most talented quarterbacks of all time too. He has one of the strongest arms ever. That is very evident with his three unbelievable Hail Mary throws. His accuracy is spot-on. His mobility is also insane because he has a sixth sense of where pass-rushers are and can also throw off of a platform, which means he doesn’t need to set his feet. Ask the Dallas Cowboys about it.

So why doesn’t Rodgers have more Super Bowl rings? Well, give him Brady’s defenses. There is a reason the Packers defense this year is being compared to that of the 2010 Super Bowl defense. That was the last great defense the Packers had. Sure, Rodgers has had help from the likes of Donald Driver, Greg Jennings, Randall Cobb, and Davante Adams at receiver. But that wasn’t good enough to offset a bottom-third-of-the-league defense.

Super Bowl teams have to be complete teams. Green Bay has had their fair share of special teams woes too. Ask the Seattle Seahawks what that means. Ask the San Francisco 49ers what that means. The Packers have always had a great offense, mainly because of the four-time MVP in Rodgers (second-most all-time, Brady has three). But they have not had consistently good defenses and special teams units throughout the Rodgers era.

Rodgers is the best singular quarterback of all time. He has the statistics and ability to back it up. But he has not had the proper help to win more Super Bowls like Brady. Has he had great offenses? Yes. Has he had great defenses and special teams units? No.

No one will ever have the career portfolio of Tom Brady. It’s that simple. However, Aaron Rodgers is the better singular player and quarterback. One player cannot carry a team all the way to the Super Bowl. This is not the NBA. Great teams have to be balanced and complete. Brady has been on way more of those teams and has been much more fortunate in his career.