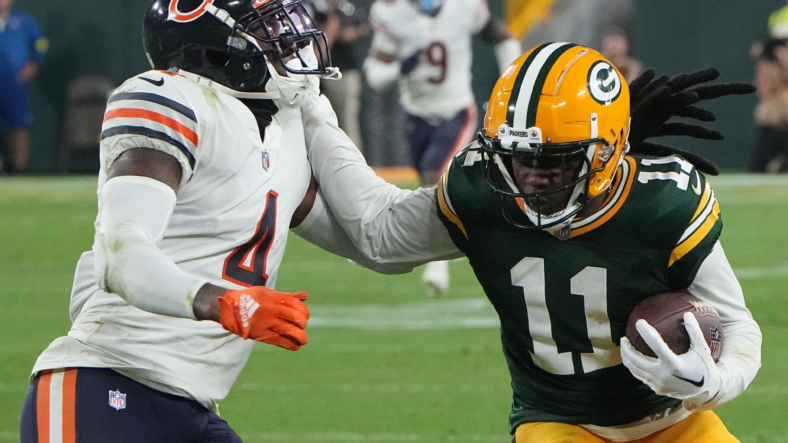 The Green Bay Packers were generally in full control against the Chicago Bears in their 27-10 win at Lambeau Field on Sunday night. The quietest reason for that was because of the help Aaron Rodgers received from his wide receivers.

Obviously, Aaron Jones stole the show with his 132-yard, two-touchdown performance. But Green Bay’s offense was able to make key plays in timely moments thanks to players like Sammy Watkins, Randall Cobb, Allen Lazard, Romeo Doubs, and Jones too. The way coach Matt LaFleur used his wide receivers on Sunday is likely how he will use them all season, and that is a good thing.

Sammy Watkins led the team with 93 receiving yards. However, he only had three receptions, as did Cobb, Jones, and rookie Christian Watson. Lazard, Doubs, and tight end Robert Tonyan all caught two passes. Running back A.J. Dillon also caught one pass.

No skill-position player had more than three receptions all night. Aaron Rodgers was very efficient, going 19-of-25 for 234 yards and two touchdowns. He found eight different receivers through the air, which is exactly what the Packers wanted to do and were planning for all offseason.

This is the strategy the Packers will use all season long. They are going to beat teams on the ground first and foremost. However, when they move through the air, they will beat teams collectively.

Green Bay Packers will be more successful by being unpredictable

There is no doubt that the combination of Rodgers and Davante Adams is one of the best in NFL history. They are the most prolific duo in Packers history (69 touchdowns). However, that is why it is ironic that this connection was one of the few reasons why they could not get to the Super Bowl.

This team was upset at home in the divisional round last season by the San Francisco 49ers. Yes, the biggest reason Green Bay lost was because they had a punt blocked late in the fourth quarter. However, San Francisco also knew that Adams was the focal point in the passing game. In a tie game, the 49ers did not allow him to beat them deep. Green Bay ended up losing 13-10.

Defenses all over the league started to realize that Adams was the dominant target in Green Bay’s offense. He was locked up in the postseason, and that would translate to a Green Bay loss. Trading Adams to Las Vegas may have been the best move for Green Bay, and nobody realizes it.

On Sunday night, fans saw the Packers use a collective group of receivers, running backs, and tight ends to be efficient in the passing attack. With the use of pre-snap motion, touch passes, and the play-action game, the Packers were able to play extremely well through the air. Each skill-position player has their own role.

Sammy Watkins is not Davante Adams, but he will play that role this season. Randall Cobb is old reliable in the slot. Allen Lazard is the big body on the outside who can also be arguably the best blocking receiver in the game. The rookies in Doubs and Watson will continue to grow and gain the trust of Rodgers through the use of jet sweeps, wide receiver screens, and big plays.

Running backs Aaron Jones and A.J. Dillon both had 1,100 scrimmage yards last season. They will be used a whole lot in the pass game too. Tight end Robert Tonyan is two seasons removed from a Pro Bowl-caliber season in which he led all tight ends in touchdown catches with 11. Longtime tight end Marcedes Lewis is also a key option in the red zone.

The Packers will win a lot this season. They are just going to do it a little differently. They will be extremely balanced on the ground and in the air. They will win collectively. There is no better quarterback than the reigning back-to-back MVP when it comes to throwing to an arsenal of pass-catchers. Green Bay is still as dangerous as ever.