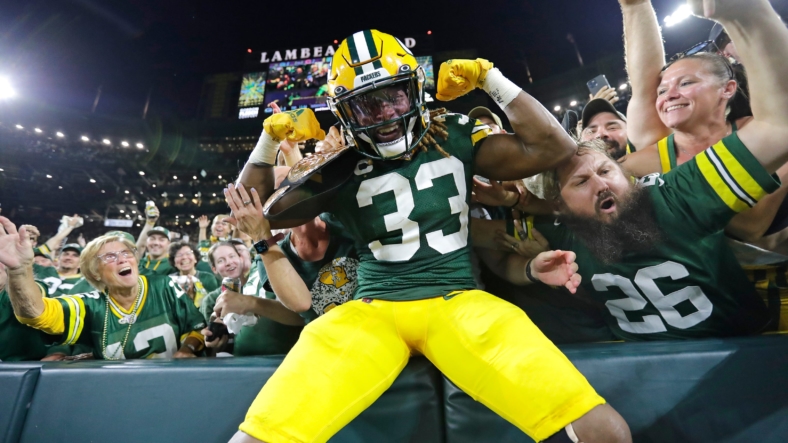 The Green Bay Packers did what they had to do. They handled their business and got back on track against their so-called “arch-rival” in the Chicago Bears with a 27-10 win at Lambeau Field on Sunday night. Aaron Rodgers was efficient. Star running backs Aaron Jones and A.J. Dillon were dynamic on the ground, and Green Bay’s defense played great after a tough Week 1 performance. Also, there were no special teams issues.

It was Green Bay’s seventh consecutive win against the Bears and their 11th win in the last 12 meetings. This performance was just what the doctor ordered. Here are three specific takeaways and notes from Green Bay’s win that could help impact their season moving forward.

A 2020 Pro Bowl selection, Aaron Jones only got eight touches in Green Bay’s opening loss in Week 1 against Minnesota. The script was completely flipped on Sunday night.

The former UTEP star received 18 total touches for 170 scrimmage yards and two touchdowns. He ran the ball 15 times for 132 yards (8.8 yards per attempt) and a touchdown. Jones also added in three receptions for 38 yards and another touchdown catch.

No. 33 can really do it all. He is the only running back outside of Derrick Henry to total 4,000 scrimmage yards and 40 total touchdowns in each of the last three seasons. Look for Packers head coach Matt LaFleur to continue to get the ball to Jones when the opportunity presents itself.

Much has been made about the losses of Davante Adams and Marquez Valdes-Scantling this offseason. How would the Packers move the ball through the air without them? The answer is collectively.

That was proven on Sunday night. Rodgers was effective (19-of-25 for 234 yards and two touchdowns). He threw the ball to eight different receivers with no one catching more than three passes.

Sammy Watkins led the team with 93 receiving yards, with 55 coming on a key play-action pass when Green Bay was backed up in the fourth quarter. Randall Cobb caught three passes from the slot. Rookies Romeo Doubs and Christian Watson each caught three passes. They were mostly for short yards, but both rookies are growing more and more confident in this offense. The running backs in Jones and Dillon both caught passes too.

When Adams was there, defenses knew the ball was going to him. Now, they have a host of players that can make plays at important times. Defenses don’t know where the ball is going. That is a huge development in Green Bay moving forward.

After getting torched by Kirk Cousins and Justin Jefferson in Week 1, Green Bay only gave up 70 total pass yards to Justin Fields and the Bears on Sunday. This was the type of get-right game that this unit needed.

Rashan Gary and Preston Smith were both in the face of Fields, causing pressure. They combined for three sacks, four QB hits, and four tackles for loss.

Star cornerback Jaire Alexander made an amazing diving interception to shut the game down after he ran from one side of the field to the other to pick off Fields. Green Bay held Chicago to just one conversion on seven third-down attempts too. With Tom Brady and Tampa Bay looming in Week 3, this was a game where Green Bay needed to get back on track defensively. They did just that.