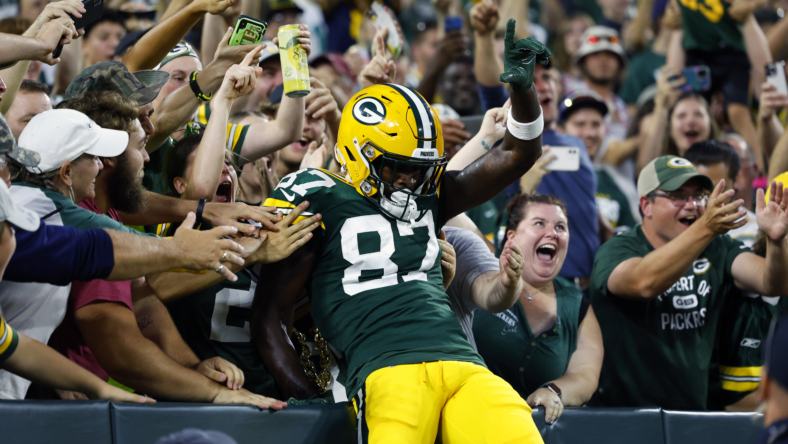 The Green Bay Packers have themselves a rising star out wide. His name is Romeo Doubs, and he officially arrived on the big stage on Sunday afternoon. The former University of Nevada star led Green Bay in catches (8) and receiving yards (73). Doubs also added in what would prove to be the go-ahead touchdown in the first quarter, which was the first of his career.

No. 87 is living up to the hype that comes with wearing that number. He showed signs on Sunday of what he can be for quarterback Aaron Rodgers in this offense. Based on the early results, it appears the Packers could continue that stretch of success when it comes to drafting wide receivers in the later rounds.

Again, the stats say a lot about the performance from Doubs. Rodgers looked his way eight times. Doubs reeled in all eight passes. He was the first Packers wide receiver not named Davante Adams with eight receptions in a game since Randall Cobb in Week 1 of 2018. He also converted four first downs.

In the first half against arguably the best defense in the league on Sunday, Rodgers and Doubs were unbeatable together. That duo, from an offensive perspective, almost single-handedly won the game for the Packers. Rodgers and Doubs did what Rodgers and Adams couldn’t do against Tampa Bay two seasons ago.

Green Bay needed Doubs to step up with starting wide receiver Sammy Watkins going on injured reserve and rookie Christian Watson missing Sunday’s game with a hamstring injury. He did just that for Matt LaFleur and Co.

In his rookie season, Doubs has answered the call when Rodgers has needed him to step up. He has been targeted 16 times in three games this season. He has caught 14 of those passes. Doubs is Green Bay’s leading receiver through three weeks (leader in targets, receptions, and yards). His performance on Sunday is an amazing sign of things to come and exactly what Rodgers has been waiting for.

If the fourth-rounder can perform this well against a Todd Bowles-coached defense, which just happens to be arguably the best in the league, imagine what he can do against a weak schedule. Up next on the schedule for the Packers are the New England Patriots (1-2), the New York Giants in London with first-year head coach Brian Daboll, the New York Jets who should be 0-3 if it weren’t for a Browns collapse in Cleveland, and the Washington Commanders (1-2).

Doubs clearly has the trust of Rodgers. Whether it is a rebuilding defense in Chicago or a Super Bowl-winning defense in Tampa Bay, it doesn’t matter who they are playing. This Green Bay offense now has another wide receiver not named Allen Lazard and Randall Cobb who, despite being a rookie, has proven that he can be a big-time playmaker whenever he is on the field.

The Packers proved on Sunday that they can win in multiple ways. One of those ways is playing great defense while looking the way of No. 87 through the air on offense. Look for Green Bay to utilize this strategy a lot as the season moves along.