Deebo Samuel trade to the New England Patriots, how it might look

San Francisco 49ers wide receiver Deebo Samuel is the biggest name being floated in NFL trade rumors. With the New England Patriots in desperate need of a game-changing offensive weapon, the perfect option has emerged.

Naturally, San Francisco doesn’t want to move its All-Pro player. He is the most important piece in Kyle Shanahan’s offense, a dynamic threat who is dangerous as a runner and receiver. While he doesn’t beat teams deep vertically like a Tyreek Hill and he isn’t like Davante Adams, this is the chess piece every coach wants their quarterback supported by.

The 49ers desire to keep Samuel. However, the situation between the two parties isn’t in a good place. If San Francisco prioritizes a Nick Bosa contract extension, which is likely given his positional value, Samuel’s future with the 49ers might not be guaranteed.

Let’s examine what a Deebo Samuel trade might cost the New England Patriots and why he could be an excellent fit for their offense.

What would a Deebo Samuel trade cost?

Related: Deebo Samuel to the Green Bay Packers, how it might look

We’ve highlighted potential acquisition costs for DK Metcalf, Tyler Lockett and A.J. Brown trades in recent weeks. As mentioned above, Samuel is a different kind of player. While he might not be the prototypical receiver like the other three pass-catchers, he’s a legitimate All-Pro talent.

If the 49ers decide to move him, it’s going to only be due to his asking price. We’ve seen contracts for wide receivers explode this offseason with many of Samuel’s peers among the highest paid NFL players in 2022. New England would need to be willing to pay Samuel what he is worth. Given the franchise has an estimated $79 million in cap space next year – before potential cap casualties – they can afford it.

The 49ers could add a receiver with the 21st pick and would add an excellent, young weapon on the defensive side. While losing Samuel would be a blow, Shanahan could reunite with Julio Jones. As for the organization, cap flexibility could be useful to pursue one of the top 2023 NFL free agents.

While the Patriots might not have a designated offensive coordinator in 2022, this will still be a quality coaching staff overseeing that side of the ball. Furthermore, Samuel’s talents make it so any smart coach will know how to utilize him in multiple ways.

As we saw with the 49ers, New England could use Samuel in the backfield (116 snaps in 2021). Just putting him back there forces linebackers and defensive ends to think about what Samuel might do. It’s just the start of his abilities as a backfield weapon alongside quarterback Mac Jones. 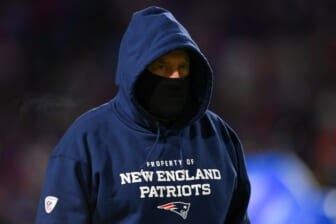 Considering the Patriots had the seventh-highest rate of run plays (45.73%), that’s especially useful. Belichick is abandoning the usage of fullbacks, opening the door to more creative looks. Things would look even better in 2022 if Jones had Samuel and either Damien Harris or Rhamodnre Stevenson in the backfield with him.

All of that would help the Patriots’ offense and that’s without touching on Samuel’s skills as a receiving threat. Even with quarterback Jimmy Garoppolo often throwing to him, Samuel posted Pro Bowl numbers in 16 games (15 starts).

San Francisco’s quarterbacks posted a 112.6 passer rating when targeting Samuel, per PFF. He finished with the second-most yards after catch (777), led the NFL in yards per target (11.7) and posted the second-best juke rate (49.4%), according to Player Profiler.

Belichick can use Samuel everywhere on the field and he’ll be dangerous. He’s also an electric returner and that’s another area Belichick values highly. Talent like this doesn’t come around very often, especially one that fits this team so nicely. Landing the 26-year-old would come at a hefty cost, but owner Robert Kraft is also making it clear he wants results.

We haven’t seen the Patriots make a bold move in a long time, but Samuel checks all the boxes. If New England wants the best version of Jones in 2022 and beyond, trading for Samuel will help deliver that.