DK Metcalf to the Green Bay Packers, how it might work 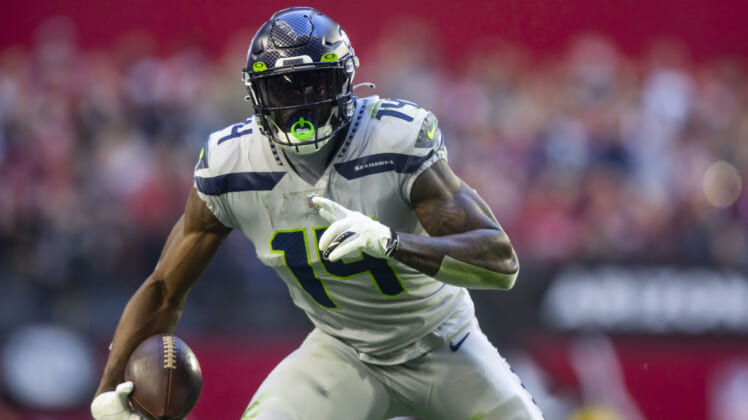 The Green Bay Packers find themselves in desperate need of a No. 1 receiver and with DK Metcalf being floated in NFL trade rumors, the possibility of a blockbuster deal exists.

Pete Carroll told 93.9 KJR on Tuesday that the franchise loves Metcalf and wants to do everything in its power to keep him for years to come. Given this is the same coach who said Russell Wilson would stay with the Seattle Seahawks days before trading him, it’s possible Metcalf could experience the same fate.

Seattle will be operating a run-heavy offense in 2022 and it already paid Tyler Lockett. With the highest paid receivers in the NFL driving up the price at the position, it might be time for the Seahawks to consider committing to their rebuild with another blockbuster trade.

With that in mind, let’s examine how the Green Bay Packers could acquire DK Metcalf and what kind of impact he would have on their offense.

What will a DK Metcalf trade cost?

The recent Davante Adams and Tyreek Hill trades provide a strong blueprint for a potential deal. Both are All-Pro receivers who wanted new contracts. Metcalf isn’t on that tier in terms of production or consistency, but his physical talent makes him the kind of weapon teams want to build around.

It would be reasonable for Seattle to start any negotiations at a first-round pick. While there’s an element of risk in making that deal for the acquiring team, with Metcalf a 2023 free agent, upside warrants the gamble. This is the same receiver who athletically compared to Andre Johnson.

Green Bay should be willing to part with the 28th overall pick for Metcalf. At the very least, the final year of his rookie deal fits into the team’s salary cap. As for the additional compensation, a fourth-round pick (140th overall) and a 2023 third-round pick could be enough.

Metcalf might not love the idea of playing in the cold, making the possibility of a long-term deal more unlikely. If he looks to hit the open market next offseason, Green Bay can use the non-exclusive franchise tag. As for 2022, they get an outstanding talent who can be the No. 1 target for Aaron Rodgers.

It might surprise some to learn that Rodgers struggled with deep passes for a significant portion of the 2021 season. From Week 1-9, per Pro Football Focus, he ranked 22nd in passer rating (70.1) and 20th in completion rate (33.3%) on throws 20-plus yards downfield.

He turned things around late in the year. From Week 10-18, the back-to-back NFL MVP posted the fourth-highest passer rating (119.0) and the sixth-best completion rate (45.5%) on deep throws. Needless to say, the connection with Davante Adams was special.

Metcalf can step in as a phenomenal deep threat for Rodgers. Despite playing in an offense that didn’t have Russell Wilson for a chunk of the season, Metcalf still finished with the third-most deep targets (30) per game and ranked sixth in air yards (1,605). Because of poor quarterback play, Metcalf led the NFL in unrealized air yards (940).

The 6-foot-3 receiver is a phenomenal target for his quarterback. Seahawks’ quarterbacks posted a 110.5 passer rating when they targeted Metcalf in 2021. A year prior, with Wilson starting all 16 games, he posted a 115.1 QB rating when throwing towards Metcalf.

Naturally, a 228-pound receiver with a 40.5-inch vertical jump can be a lot more than a field stretcher. He drew 19 targets in the red zone last season and is among the most targeted wide receivers near the end zone since he entered the NFL.

He’ll earn trust from Rodgers quickly. Just as important, opponents will be forced to shift more coverage towards him in 2022. It bodes well for Allen Lazard, who could be on the verge of a breakout season. All of this is even before Green Bay adds a new slot receiver into the mix.

Moving to Wisconsin might not seem like the ideal scenario for Metcalf. However, this franchise can offer him a chance to catch passes from a Hall of Fame quarterback and he’ll compete for a Super Bowl. If he performs, a well-deserved raise would follow.