The New England Patriots needed to make significant improvements to take a step forward in the 2022 NFL season. While the Buffalo Bills and Miami Dolphins made huge additions, the Patriots will likely head into the NFL Draft facing a lot of questions.

Bill Belichick made a few moves this spring. New England added defensive back Jabrill Peppers, re-signed Trent Brown and Devin McCourty then pulled off a trade for DeVante Parker. The transactions are significantly smaller than what transpired a year ago.

While that’s not to say the Patriots took the wrong approach this offseason, the early months for Belichick have raised some questions both from analysts and even NFL executives.

Speaking anonymously to The Athletic’s Mike Sando, a few team executives raised some questions about the Patriots’ offseason.

“Belichick lost a play caller that everyone seems to agree is a fantastic play caller and brought in no one with any play calling experience. They have made no financial commitments to anyone of significance. They made an in-division trade for a wide receiver (DeVante Parker) with a laundry list of soft-tissue injuries. And remember, Bill could have called anyone who was on his staff who went to Miami under (Brian) Flores and I’d be shocked if those guys said Parker was worth a third-round pick.” 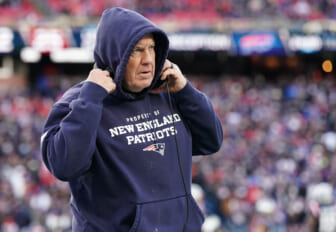 Also Read:
Why the New England Patriots are early losers of a wild NFL offseason

Parker does have a history of injuries. He missed time in 2021 with a hamstring strain and a shoulder injury. A year earlier, he was sidelined multiple weeks with a strained hamstring that came just two months after sitting out a Week 6 contest with a groin strain. Since entering the NFL, Parker has suffered seven hamstring strains and experienced other soft-tissue issues.

New England felt trading a third-round pick for Parker was justified because it will receive a 2023 compensatory third-round selection for the J.C. Jackson departure. There’s also a likelihood that Belichick reached out to Brian Flores, who he still communicates with despite the text that is part of the suit against the NFL.

Another NFL executive is skeptical of Parker, even while acknowledging that Belichick likely scouted him extensively.

“No doubt, Bill played against DeVante, so he must have a feel for what he is getting. I just don’t agree with it — the guy is always hurt. When we played Miami, I don’t remember thinking, ‘Well, we have to defend DeVante.’ ”

There is certainly a possibility that the trade for Parker works out for New England. With that said, the previous point about play-caller Josh McDaniels leaving is significant. He took multiple assistants with him to the Las Vegas Raiders. As for his replacement, Belichick and Matt Patricia will be more involved with the offense this year.

All of this isn’t to suggest the Patriots won’t be a playoff contender in 2022. However, the franchise will need quarterback Mac Jones to make a huge leap forward for this team to have a shot against the best teams in the AFC.