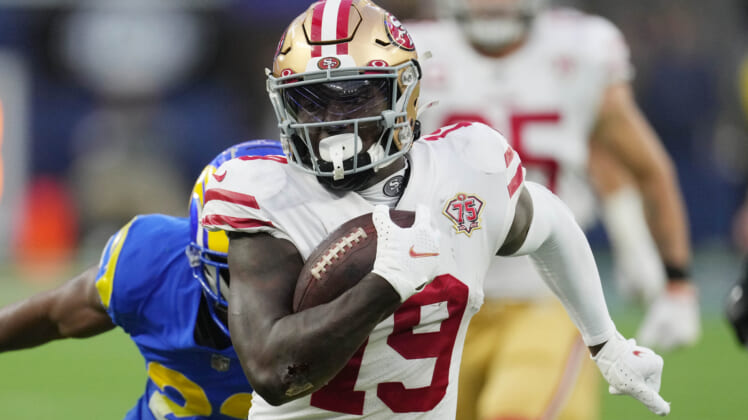 Have we seen the last of Deebo Samuel with the San Francisco 49ers? If you put weight behind the Pro Bowl receiver’s actions on social media, he could be demanding a trade.

Not all that different from Kyler Murray‘s approach earlier this offseason, Samuel has stripped his Instagram of all references to his current team, removing the 49ers from his profile pic, unfollowing the team’s account and has deleted over 80 posts according to Ari Meirov.

Deebo Samuel is entering the final year of his rookie contract, which sets him up for a massive payday in the 2023 offseason. However, being that he’s the most talented player on the 49ers’ offensive depth chart, and arguably one of the best on their entire roster, it had been widely assumed the team would get out ahead of any potential unrestricted free agency. Of course there’s always the franchise tag, but signing him now could mean a more affordable price later when the salary cap is set to rise.

We’ve seen other receivers get new contracts this offseason from Tyreek Hill earning $30M per season, Davante Adams at $28M per, and recently Stefon Diggs at $26M per year. Where would Samuel’s new extension fall? Likely right at the top with Hill.

Samuel, 26, may not quite match the speed of the Cheetah, but from what he offers as a runner too, one could argue that the versatile weapon is worth even more than what the 28-year-old Hill brings to an offense. Perhaps this is the bigger issue in San Fran. Are the 49ers and Samuel’s agency in agreeance on his player value?

With the front office working through what to do with Jimmy Garoppolo in a locker room that appears to be behind their veteran quarterback who’s led them to two NFC Conference Championship games, it could be that Samuel doesn’t like the direction the organization is heading, by seemingly picking Trey Lance over the proven commodity.

Whatever has led to Samuel’s decision to distance himself from the only NFL team he’s ever known will likely come to the surface over the next few weeks. Maybe it’s as simple as a Jimmy G trade, maybe Samuel’s contract negotiations aren’t going well, and maybe the team decides to capitalize on a red-hot receiver trade market and decides to take a King’s ransom for one of the most talented dual-threat runner/receivers in football.

Just as we speculated, now a report has emerged suggesting Samuel wants to be recognized as a top earner. Specifically, Samuel would like to be the highest-paid non QB in the NFL according to Clarence Hill Jr.

Who wouldn’t want to make more money? Whether his reported demands will lead to a departure remains to be seen. The Niners know how important Samuel is to their offense, without him Lance’s first full season as a starter will likely be much different. Instead the team likely prefers a way to keep Samuel in town, but at what cost?