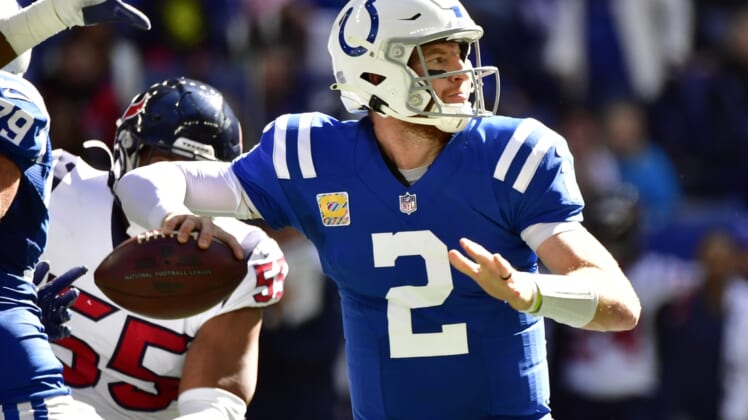 Carson Wentz is proving to be a difference-maker for the Indianapolis Colts just as coach Frank Reich forecasted.

The former Philadelphia Eagles quarterback will look to throw multiple touchdown passes for the fourth straight game when the Colts face the San Francisco 49ers on Sunday night at Santa Clara, Calif.

Indianapolis acquired Wentz in the offseason and reunited him with Reich, who was Philadelphia’s offensive coordinator for Wentz’s first two NFL seasons (2016-17).

Wentz looked like he was headed to stardom when he threw a career-high 33 touchdowns against seven interceptions in 2017 but his production went down after Reich departed to become the Colts’ coach.

Now Indianapolis (2-4) is seeing what it envisioned when it made the trade. Wentz completed 25 of 35 passes for a career-best 402 yards in a 31-25 overtime loss to the Baltimore Ravens on Oct. 11 and averaged 20.3 yards per completion in last Sunday’s 31-3 whipping of the Houston Texans.

Overall, Wentz has 1,545 yards and nine touchdowns against one interception.

“This is the guy I knew in Philadelphia,” Reich said of Wentz. “He can be a big-play machine. What I’ve been more impressed with: I know he can make those plays, but I like the way he’s taking care of the football.”

The passing game will be without Parris Campbell (foot), while the status of fellow wideout T.Y. Hilton (quadriceps) is uncertain. Hilton didn’t practice Wednesday.

“I think Quenton can be a quick return because of who he is and where he’s been,” Reich said Wednesday. “We think he’s been making good progress.”

The 49ers (2-3) are in the midst of a three-game losing streak as they come off a bye week.

Jimmy Garoppolo is in line to be the starting quarterback as he returns from a calf injury that caused him to miss the Week 5 loss to the Arizona Cardinals. Garoppolo was limited in Wednesday’s practice but said the injury is improving.

“During the bye week, we made great strides,” Garoppolo said Wednesday. “It will get better every day. Right now, it feels great.”

Rookie Trey Lance started against Arizona but sprained his left knee. He missed practice on Wednesday and appears unlikely to play.

“It’s the same diagnosis and we were hoping (Lance) could go this week. Doesn’t look like it,” San Francisco coach Kyle Shanahan told reporters. “He might have a chance at the end of the week but I’d be surprised if he’s not ready to go next week.”

Lance and Wentz are both products of FCS power North Dakota State.

Nate Sudfeld is in line to back up Garoppolo this week.

The 49ers have gone more than a month without a victory. That isn’t good in the NFC West, where they’re chasing the Cardinals (6-0) and Los Angeles Rams (5-1).

“We could easily be sitting at 5-0 right now,” 49ers left tackle Trent Williams said. “Obviously, we’re not. We’re 2-3 but we go back and revisit every loss, you can find some good in that. There were some things where we could have won some games but we didn’t take advantage of the situations.”

Williams sat out Wednesday’s practice due to elbow and ankle injuries.

The San Francisco defense, led by end Nick Bosa (five sacks), will be challenged by Indianapolis running back Jonathan Taylor, who had a season-high 145 rushing yards and two touchdowns last week. Taylor ranks fifth in the NFL with 472 rushing yards.

The Colts have won the past four meetings.