With Aaron Rodgers aboard, the Packers are legit NFC title contenders. Even after initial struggles in Week 1 and through the first two quarters of Monday's win over the Lions, there's a lot to like about Green Bay. Unfortunately, that doesn't extend to the defensive side of the ball. San Francisco should take advantage mismatches throughout and come away with the home win to start 3-0.

All of our predictions are based on the 49ers keeping and starting these key players:

San Francisco was up 38-10 in the third quarter of Sunday's game against the Detroit Lions, only to see the heavy home underdogs pull to within 41-33 with a chance to tie the game. While the 49ers' defense held, this was not the way to end Week 1. The good news? Jimmy Garoppolo completed 17-of-25 passes for 314 yards in the win. Trey Lance also threw his first NFL touchdown.

A win is a win is a win. San Francisco heads home at 2-0 for just the second time in the past decade after a hard-fought victory over the Eagles in Philadelphia. That included taking a 17-3 lead late in the fourth quarter before having to sweat it out. Jimmy Garoppolo played another mistake-free game, completing 22-of-30 passes with two total touchdowns. Nick Bosa got to Jalen Hurts for two sacks. 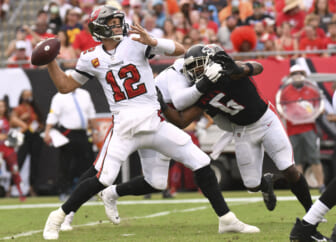 Kyle Shanahan is a mere 1-3 at home against Seattle at home against Seattle since taking over as the 49ers' head coach. That must change if San Francisco wants to rebound following an injury-plagued 2020 season. The good news? These 49ers match up extremely well against the Seahawks -- primarily on defense. A healthy Nick Bosa returning with All-Pro linebacker Fred Warner should do just enough against Russell Wilson and Co. to come out on top at home in this Week 4 matchup. Regardless, it will be a telling early-season divisional game for both squads.

The 49ers and Cardinals have played competitive games over the past couple seasons. Last year saw Arizona win by four in Santa Clara to open the campaign and lose by eight at home later in the season. Back in 2019, San Francisco took both games by a combined 13 points. The moral of the story here? Expect a close affair with the Cards coming out on top at home.

Whether the San Francisco 49ers start Trey Lance or Jimmy Garoppolo, this figures to be a low-scoring game. Both teams want to win with their defense and controlling the clock. Long drives, plenty of field goals and Carson Wentz making just enough plays in the final minutes to secure a victory.

Perhaps, this could be a matchup between Trey Lance and Justin Fields. However, it now seems more likely that Chicago will roll with Andy Dalton under center. If so, Matt Nagy's squad is much too limited on offense to really make this a competitive game. Expect a 49ers win going away in the Windy City.

Protecting the home field against fellow NFC West opponents is going to be a big deal for the 49ers in the ultra-competitive division. San Francisco is just 4-8 against said opponents at Levi's Stadium since Kyle Shanahan took over in 2017. We're expecting the team to flip the script in 2021. In this particular matchup, the 49ers' defensive line will have a distinct advantage over the Arizona offensive line in front of Kyler Murray and be able to lead to a season split.

Two of the favorites in the NFC West heading into the 2021 NFL season, whoever comes out on top in this division will have to take care of business in their head-to-head matchups. Unfortunately for the 49ers, Los Angeles seemingly has matchup advantages clear across the board. That includes Cooper Kupp and Robert Woods taking advantage of slower-footed 49ers cornerbacks and the presence of Aaron Donald against a still-questionable interior of the 49ers' offensive line.

Another potential matchup between two rookies, Trevor Lawrence is the sure-fire starter for Jacksonville. He also has a ton of weapons and a solid offensive line in front of him. At the very least, that should make Jacksonville competitive against better teams after losing its final 15 games a season ago. Unfortunately, the defense remains a major question-mark. Whether it's Jimmy Garoppolo or Trey Lance under center for the 49ers, they should score enough to win in Duval.

I am still not sold on Kirk Cousins being able to go to into Levi's Stadium against a fully-healthy 49ers defense and accomplishing a darn thing. His last appearance against this unit led to an historically bad Vikings performance on offense. With Nick Bosa back and questions lingering on the Vikings' offensive line, look for a narrow San Francisco home win.

The recent history of this rivalry is interesting. Last season saw the 49ers lose by a mere three points in Seattle despite Garoppolo going down to an injury. Back in 2019, it clinched the NFC West with a dramatic win over the Seahawks in the Pacific Northwest in Week 17. What does this mean? Despite holes for both the Hawks and 49ers heading into 2021, we can expect close games. Look for Russell Wilson and Co. to hold court at home.

At the very least, Cincinnati should be fun in 2021. Last year's No. 1 pick, Joe Burrow, is slated to return completely healthy after suffering a torn ACL in 2020. He'll have rookie No. 5 pick Ja'Marr Chase to toss the rock to. Add in Tee Higgins, and this offense could be good. Unfortunately, the Bengals' defensive front seven is a hot mess after their defense yielded nearly four touchdowns per game in 2020. The 49ers will take advantage of this.

The Kyle Shanahan game. Could this be Atlanta’s way of finally proving it has moved on from that era of Falcons football? I am not buying it in this Week 15 matchup in California. Whether it’s Jimmy Garoppolo or Trey Lance under center, these 49ers have way too much firepower on offense for the Falcons to be able to stay afloat.

Here's an interesting stat. Ryan Tannehill is 18-8 as the Titans' starter since joining the team back in 2019. Since the start of the 2014 season, all other Titans quarterbacks boast a combined 34-52 record as starters. There's just something about Tannehill sharing a backfield with Derrick Henry. In and of itself, that should be enough for Tennessee to come out on top at home in what will be a hotly-contested affair. Add in the presence of Julio Jones against a now-questionable 49ers cornerback group, and it will lead to a Titans win.

This could get laughably bad, especially if the 49ers are playing for postseason positioning and the Texans end up being as bad as we envision. Now that there's a good chance Deshaun Watson could be forced to sit out the 2021 season, that's magnified further. In fact, I wouldn't be surprised if the 49ers ended up resting some of their starters after the first half in this home outing.

Los Angeles won both games against its division rivals a season ago by a combined 11 points. That's despite the fact Jared Goff threw two touchdowns against three interceptions in those matchups. With Matthew Stafford acting as a major upgrade under center in 2021, this won't be a problem. At the very least, it should allow the Rams to protect their home-field in this matchup.