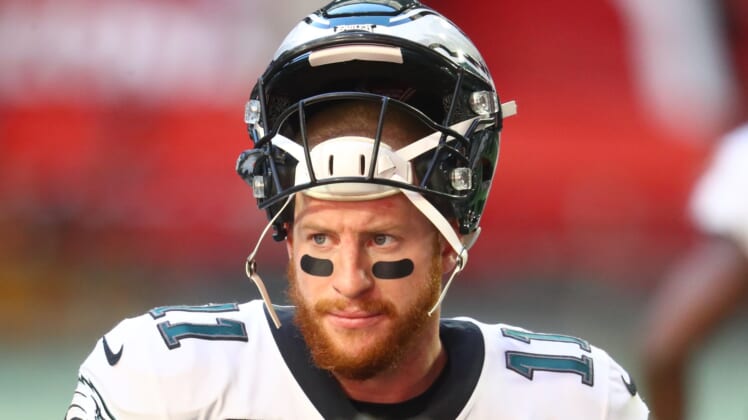 Carson Wentz trade talks can now be considered drawn out. It was almost two weeks ago reports surfaced that the Philadelphia Eagles were close to trading the quarterback to either the Chicago Bears or Indianapolis Colts.

Said reports seemed to come directly from leaks within the Eagles’ organization to the media. Primarily, the idea that Wentz would somehow land Philadelphia a first-round pick and quarterback Nick Foles as well as running back Tarik Cohen in a Carson Wentz trade with Chicago. That obviously isn’t happening.

Meanwhile, Indianapolis is said to be offering up two second-round selections for the recently-benched Wentz. More than anything, that seems to be his true value. Indianapolis is apparently maintaining this position.

“While it’s been quiet, Eagles and Colts have continued trade talks for Carson Wentz. One important aspect of this, I’m told, is Indy hasn’t significantly changed its offer from where it started more than a week ago. For the most part, Colts aren’t budging,” Zak Keefer of The Athletic reported on Wedesday.

There’s a lot to unwrap in one small report.

First off, news that the Eagles and Colts are continuing Carson Wentz trade talks should lead to optimism that a deal can be worked out. Indianapolis is not backing away from the table altogether.

Secondly, there’s just not a strong market for Wentz. The Bears have already grown impatient with the Eagles’ asking price. Of other quarterback-needy teams, the Patriots, Broncos and 49ers lack genuine interest in Wentz.

What does that mean?

It’s a bit more simple than it seems on the surface. Wentz will likely be the Colts’ Week 1 starter come next season. The difference between two second-round picks and a first-round pick is not too much.

In fact, some teams might prefer the two second rounders over a late Day 1 selection. Remember, that’s exactly the haul the San Francisco 49ers received from the Kansas City Chiefs for Alex Smith all the way back in 2013. While we’re now eight years removed from said deal, it could act as a stepping stone in continued Carson Wentz trade talks.

Philadelphia has more than made it clear that Wentz is on the chopping block. Heck, recent NFL rumors suggest that the team could look to go quarterback in the 2021 NFL Draft. Even if that’s only a half-truth, it stands to reason that the Eagles have no intention of bringing Wentz back.

Short of other teams getting involved and based on the Bears’ growing disinterest, it stands to reason that Wentz will soon be a member of the Colts. It’s now all about how a final trade will look.

Wentz, 28, had a miserable campaign for the Eagles in 2020. He tied for the league lead in interceptions with 15 despite being benched after 12 games. He also led the team to a horrible 3-8-1 record in 12 starts.

In an effort to find a replacement for the retired Philip Rivers, the Colts could bank on former Eagles offensive coordinator Frank Reich turning things around. Wentz put up his only Pro Bowl season under Reich as a sophomore back in 2017, throwing 33 touchdowns against just seven interceptions.

Click below for more Philadelphia Eagles rumors and news.