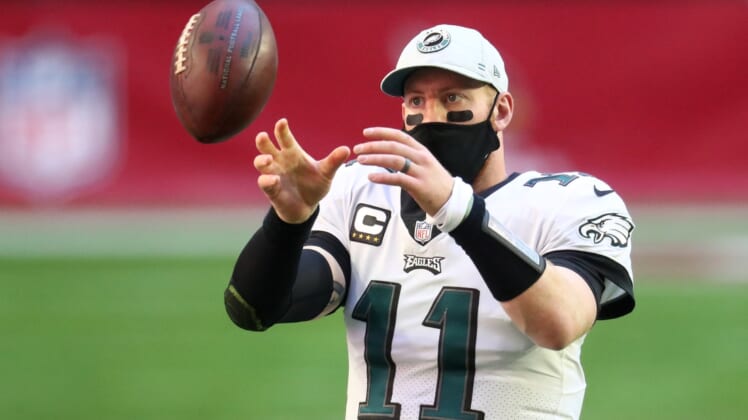 Chicago Bears rumors continue to point to a potential Carson Wentz trade with the Philadelphia Eagles. It was noted this past weekend that the two sides were close to a deal, a report that has since been rebuffed.

Said rumors included Chicago sending quarterback Nick Foles, running back Tarik Cohen and a first-round pick to Philadelphia for the embattled Wentz. That didn’t seem to make too much sense from the Bears’ perspective. It also seems like said details were leaked from the Eagles’ organization to up the ante in trade talks, which apparently include the Indianapolis Colts.

We now have some more information regarding Wentz and the Bears. It sure the heck looks like talk of a trade to the Windy City was overblown.

“There’s a sense that the Chicago Bears — another interested party — are growing impatient, one of the sources said. According to the person, the Bears believe the Eagles have overvalued Wentz,” Mike Kaye of NJ.com reported on Tuesday.

At this point, interested teams believe that Philadelphia is overvaluing what Wentz could bring the team back in a trade. That makes sense. He tied for the league lead in interceptions with 15 last season despite being benched for the final four games of the season. Wentz is also playing under a four-year, $128 million contract.

“They don’t want to give Wentz up for much less than the Matthew Stafford haul,” a source told Kaye on Tuesday.

That’s just not going to happen. Wentz is playing under a terrible contract. He regressed in such a manner last season that then-Eagles head coach Doug Pederson opted to bench the quarterback.

More than anything, this seems to be posturing on the Eagles’ part. There’s no reality in which general manager Howie Roseman actually believes he can get a Matthew Stafford-like haul for Wentz. None.

Chicago currently has Nick Foles under contract with Mitchell Trubisky set to hit free agency. The team has been in on Deshaun Watson trade talks, meaning that general manager Ryan Pace is looking for a dramatic upgrade from a season ago. It’s an open question whether Wentz would provide that.

As for a potential Wentz trade, both the San Francisco 49ers and above-mentioned Colts are apparently in on the quarterback. While Indianapolis needs to find a starter following the retirement of Philip Rivers, San Francisco could run it back with Jimmy Garoppolo or trade for another quarterback. As with the Bears, it’s an open question whether Wentz would be an upgrade over Garoppolo.