Andy Dalton was the Cincinnati Bengals’ quarterback for a long time, but the Chicago Bears signal-caller gets to take on his former team and No. 1 overall pick successor Joe Burrow in one of Sunday’s best Week 2 games.

Will the Red Rifle get some vengeance on his former teammates, or will Burrow get the Bengals off to a shocking 2-0 start in the Windy City? Keep reading for our full preview, as Dalton’s starting tenure feels like it could end any day with rookie Justin Fields waiting in the wings.

Chicago Bears vs Cincinnati Bengals: What you need to know

It’s worth noting that Chicago, despite its sound defensive reputation, got exposed a little bit in their season-opening 34-14 loss to the Los Angeles Rams. That Bears secondary got roasted for multiple big plays against LA’s deep stable of pass-catchers, and something similar could be in store Sunday.

Bear in mind that Bengals coach Zac Taylor is from Sean McVay’s coaching tree. He has rookie phenom Ja’Marr Chase, Tee Higgins and Tyler Boyd at his disposal. That trio if Cincinnati wideouts could really give Chicago headaches, particularly since Taylor can learn from what worked so well for McVay and adapt it to his own game plan.

OK, so here’s the rub with Cincinnati: Great as Burrow looked in Week 1 versus the Minnesota Vikings off that major knee injury, he got hit a lot by a defense that doesn’t have near the firepower Chicago does in the trenches.

Burrow got sacked five times, and Minnesota logged seven QB hits. That’s not sustainable over a 17-game season, no matter how tough Burrow is. Khalil Mack, Robert Quinn and Akiem Hicks among others will be coming in full force, and it seems doubtful that the Bengals have the personnel to withstand the pocket onslaught.

These two coaches are believed to be offensive geniuses. When you consider that Taylor constantly puts Burrow in harm’s way and Nagy refuses to start Justin Fields at QB, though, each man merits any and all criticism.

Maybe neither is on the hot seat per say, but a 0-2 start for Nagy would be a bad look, and Taylor badly needs any win he can get in the midst of an AFC North division that could have three playoff teams outside of Cincinnati. 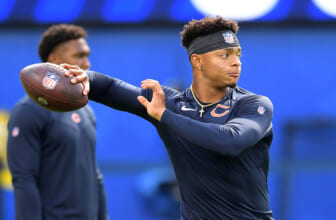 The bottom line: This may be the last-gasp effort Dalton has to prove he deserves to continue starting over Fields. He’ll be extra fired up to perform against the Bengals, and Chicago’s defense will be eager to put Week 1’s embarrassment behind them by taking some frustration out on Cincinnati’s outmatched o-line.