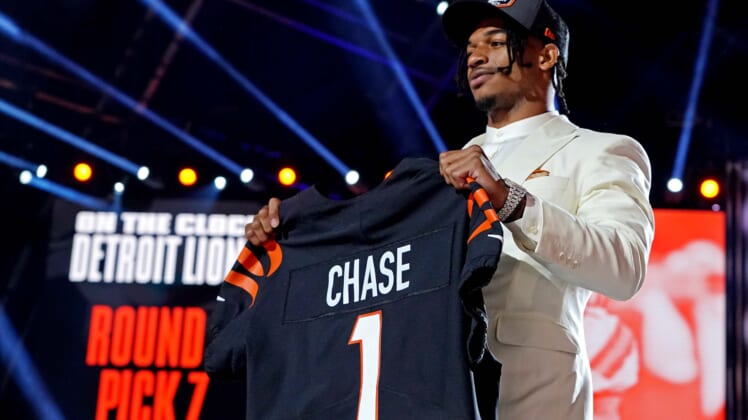 Apr 29, 2021; Cleveland, Ohio, USA; Ja’Marr Chase (LSU) poses with a jersey after being selected by Cincinnati Bengals as the number five overall pick in the first round of the 2021 NFL Draft at First Energy Stadium. Mandatory Credit: Kirby Lee-USA TODAY Sports

The LSU connection between Ja’Marr Chase and Joe Burrow is alive and well for the Cincinnati Bengals in Week 1, as the pair combined for a pretty, 50-yard touchdown against the Minnesota Vikings on Sunday.

Check out the video of Burrow’s bomb to Chase down the right sideline, as the Bengals raced out to a late first-half lead over the visiting Vikings:

Dropped passes plagued Chase throughout the NFL preseason, and questions arose as to whether the No. 5 overall pick in this year’s draft was worthy of such a label. Concerns about rust lingered, as he’d opted out of the 2020 college football season.

But then again, Chase and Burrow combined to be one of the best passing game combinations in NCAA history when they helped LSU to a national title during a magical, undefeated 2019 season. That meteoric rise vaulted Burrow into being the No. 1 overall pick to Cincinnati.

The Bengals were criticized for acquiring Chase in the first place because of their woeful offensive line, which led to a major knee injury for Burrow. At least so far, Chase is living up to the hype, and as long as Burrow gets enough protection up front, hopefully it’s the first of many downfield connections for Cincinnati’s dynamic duo.