The Chicago Bears appear determined to suffer through a little more mediocre quarterback play by Andy Dalton before handing the reins to rookie first-round pick Justin Fields. That doesn’t mean everyone in the organization agrees with head coach Matt Nagy’s decision.

In fact, the man directly beneath Nagy, with the most authority of the offense the Bears are hoping to eventually build around Fields, made a not-so-subtle suggestion on Wednesday that the former Ohio State star is fully capable of playing full-time right now.

Check out this exchange between offensive coordinator Bill Lazor and a local reporter regarding Fields’ readiness to play, as captured by NBC Sports Chicago’s Adam Hoge, and transcribed below:

“Q: Based on what he did in Week 1, is Justin Fields ready for a full series?

Lazor: I would have said after the preseason that he’s moving quickly and ready for whatever’s thrown at him.

Q: If he’s ready for it, then why isn’t he getting those additional chances?

Lazor: I think Matt [Nagy] has probably addressed what his philosophy is on the quarterback position. I don’t think that’s any different. I don’t think there’s any reason for me to answer that.”

Oh, but sir! Mr. Lazor, you may have been trying to be vague in your responses to that tough line of questioning, but you lived up to your surname with the precision in which your intention cut through.

It’s clear as day to anyone beyond Halas Hall that Fields should be starting, and that paradigm is apparently seeping through to the coaching staff as well. 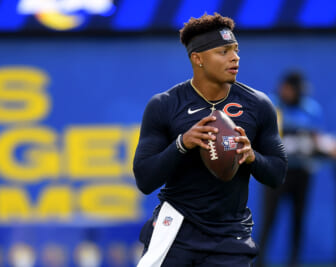 If, legitimately, the closest person to the situation other than the head coach is dropping this gigantic of a hint that, yes, Fields can play, then he can probably play.

The main reason Nagy isn’t pressing Fields into action is because of his stubborn adherence to this belief that he has a similar situation to what he experienced in Kansas City as an assistant coach. Alex Smith was the veteran incumbent starter, and Patrick Mahomes sat behind him for all but one game of his rookie season. Mahomes proceed to win MVP the next year, and all kinds of accolades thereafter.

But again, we Fields stans — and um, us people who think about football in a logical fashion — can say it until we’re blue in the face: Smith led KC to the playoffs for multiple years before Mahomes arrived, was the established leader of the team, and was part of a much better, more stable organization across the board. 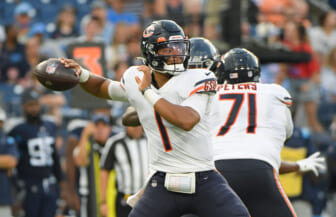 Chicago is a bunch of chaos, dysfunction, instability at the QB position, and Dalton just got there this offseason. He’s never won a playoff game.

Let’s also remember that the Bears were so blindingly lucky to even get the chance to take Fields in the draft.

When Fields was still there at 11th overall, thankfully general manager Ryan Pace had a relationship with New York Giants GM Dave Gettleman to pull off a trade. Otherwise, Chicago would be rolling with Dalton and — Nick Foles maybe?

Nagy admitted defeat last year when his alleged play-calling wizardry wasn’t working. He handed duties over to Bill Lazor. Lo and behold, the Bears found a spark down the stretch and made the playoffs with Mitchell Trubisky under center.

Whether it’s ego, a kinship with Dalton or…look, who knows? The point is, Nagy is in charge of the call sheet again, and Chicago just got blown off the field 34-14 against the Los Angeles Rams in Week 1.

The home opener, facing a vulnerable Cincinnati Bengals defense this Sunday, seems like the ideal setting to trot Fields out there. At this point, it’s not going to happen but for a play at a time, unless Dalton has an abysmal start.

Trubisky is a more athletic QB who opened up Chicago’s rushing attack in 2020, and Lazor capitalized on that skill set. David Montgomery had a strong showing in Week 1, but that’s more due to the Rams daring Dalton to beat them with his arm than stacking the box and focusing on stopping the Bears’ starting tailback.

Bottom line: Fields is like a 3.0 version of Trubisky from a physical tools standpoint. The ceiling of Chicago’s offense would be exponentially higher with Lazor dialing up plays and Fields being the clear-cut starter. Chances are, if Fields got to start, Lazor would call the shots once again, if last year is any indication.

Alas, we all wait until Nagy becomes the last to find out what the no-brainer best decision is.