The Chicago Bears are doing all they can to be uninteresting and delaying gratification for their fan base to finally welcome in the Justin Fields era. Now it’s getting to the point the first-round rookie out of Ohio State is almost forcing the coaching staff’s hand because of how ahead of the curve he is.

Although Andy Dalton will continue to start for Chicago, NFL Network’s Ian Rapoport reported prior to Week 2’s home opener against the Cincinnati Bengals that Fields will see more snaps, and that he’s delivered daily “wow moments” in practices:

Rapoport also reported — there’s something so cathartic about typing his surname in close proximity to “report” or variations of the word — that the Bears are “head over heels” in love with Fields. He’s further along than they could’ve anticipated.

We’ve seen Chicago head coach Matt Nagy adapt when things aren’t working, such as when he ceded play-calling duties to Bill Lazor last year, and the Bears found a late spark to sneak into the playoffs. However, Nagy seems a little less adept at identifying a viable QB and sticking with him.

Nagy waffled between Nick Foles and Mitchell Trubisky last season to mostly awful results. It’s plain as day that Fields has more upside than Dalton, yet Nagy is still struggling with the most important decision for his own future. 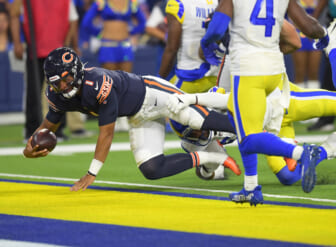 In Week 1 against the Los Angeles Rams, Fields made the most of his limited opportunities, completing two passes for 10 yards and running for his first NFL touchdown from three yards out. His presence brought a spark to the Bears’ offense that was lacking under Dalton, who logged a 72.9 passer rating and averaged just 5.4 yards on 38 passing attempts.

The tired analogy Nagy makes to his situation as an assistant in Kansas City, when future Super Bowl and league MVP Patrick Mahomes sat behind Alex Smith for almost a full season is just annoying at this point. So is his refusal to play Fields.

It’s only been one game. Everyone seems to know what the right move is, save for the man in charge. Let’s see what Nagy has in store for Fields in Week 2.