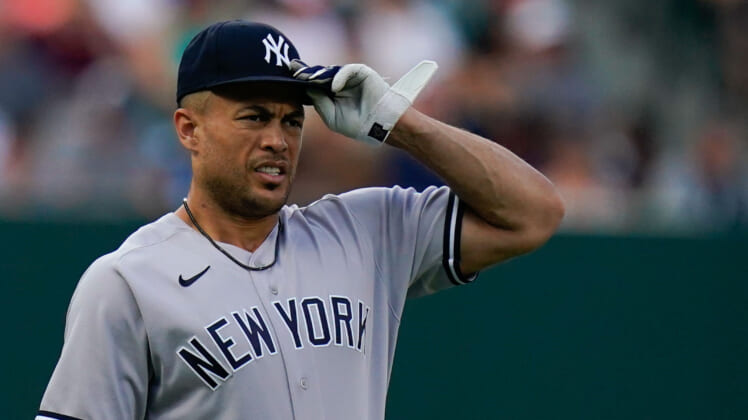 In recent weeks, the New York Yankees appeared to be drowning their division lead which narrowed to nine games. Thanks to the ghost runner in last night’s duel with the Tampa Bay Rays, the Yankees were fortunate to load up the bases for Josh Donaldson.

He’s hit just .238 with runners in scoring position, yet Donaldson provided the blow which could be the turning point in the Yanks’ recent slide. Donaldson clubbed an opposite-field grand salami which propelled the Yanks to an 8-7 victory.

It might not be a cogent basis for their recent plummet, but the Bombers have coped with an ample amount of injuries throughout the season. Relievers Michael King and Chad Green have suffered season-ending injuries, which dealt a critical blow to the bullpen.

The Yankees’ injury woes may be overwhelming, however, an intriguing update is what fans need to hear from Aaron Boone. Several players including Giancarlo Stanton, Miguel Castro, and others have made progress towards a return to baseball activities.

Prior to Stanton’s IL stint, retroactive to July 24th, the Yankees were on a complete tear. Since then, the Yankees have slugged .397 with a collective 3.5 WAR over that 22-game stretch.

The number 22 has no relevance whatsoever aside from the clear struggles without their slugging outfielder. That identical stretch except with Stanton involved, the Yankees slugged .475 with a 7.3 WAR. There are other factors that come into play when determining the cause of a team’s struggles, but the absence of Stanton has made a noticeable impact.

According to Aaron Boone, Stanton will begin his rehab assignment over the weekend and is aiming for a return to the lineup next week. Although there is leeway for his assignment to take effect on Friday.

Zach Britton hasn’t suited up in pinstripes in 2021 due to an essential Tommy John procedure. In what would be an age-34 season, the bullpen awaits his return. Britton has tossed just 37.1 frames in the past two seasons, while putting away just 32 of his opponents via the strikeout.

The southpaw is expected to throw another live session on Saturday. The next step would be pitching in an actual game, which will be initiated depending on how the sessions run.

The Yankees were sure that a 60-day IL stint was inevitable for Miguel Castro’s condition. His shoulder was originally a minor issue which grew into a more concerning injury. Boone expects Castro to begin baseball activity in the next week or so.

Over the last 14 days, the Yankees bullpen issued 5.35 walks per nine innings with a 4.25 FIP. They did promote Ron Marinaccio for another MLB stint, however, the bullpen has been most prone to injuries. As a whole, they have held up fairly well, yet the last 14 days prove that Castro and Britton’s return are even more vital.

While the pair of relievers still have a ways to go in their return to pinstripes, the Yankees are optimistic that they will be ready for the postseason.

Related: 3 things that need to happen for the New York Yankees to get back on track