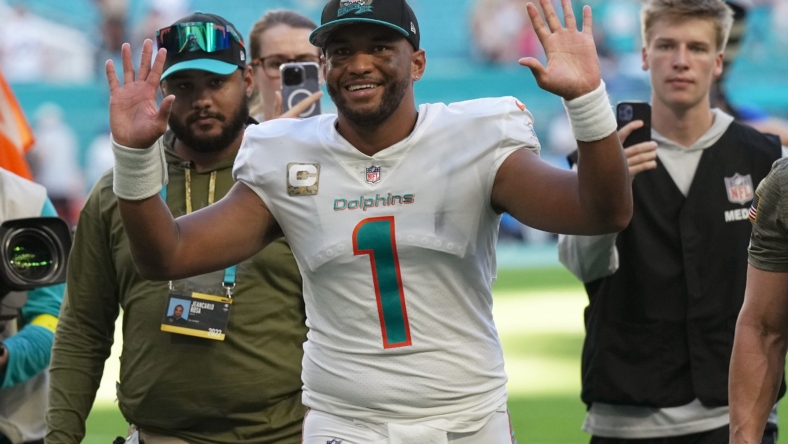 Miami Dolphins quarterback Tua Tagovailoa entered his third NFL season with a ton of questions about his ability to be a franchise guy.

Miami had brought in a new head coach in Mike McDaniel who had no built-in relationship with the former Alabama star. Meanwhile, Tua’s first two seasons after Mami made him a top-five pck back in 2020 left a lot to be desired.

With Dolphins general manager Chris Grier going all in to provide the young quarterback with the necessary supporting cast, it was time for Tagovailoa to show his stuff.

Now that Miami heads into its Week 11 bye in first place in the AFC East with a 7-3 record, it seems pretty clear that Tua has taken this pressure and run with it. Miami is 7-1 in the eight games he has started. The team was 0-2 while Tua was sidelined with that now-infamous head injury.

With Miami in the midst of a four-game winning streak before it ultimately takes the field Week 12 against the Houston Texans, Tua has now entered the NFL MVP conversation in a big way. This four-game span tells us a lot about where he is at as a quarterback in the league right now.

A lot was made about Tua’s inability to get the ball down the field and whether he’d be able to make sweet music with new wide receiver Tyreek Hill. That criticism seems laughable at this point in the season.

“I think I’ve grown a lot with the deep balls, huh. That was probably a subtle jab but it was a jab,” Tua told reporters after Miami’s Week 8 win over the Detroit Lions.

It’s not that the former star in Tuscaloosa has been ignorant of the criticism he’s received thus far in his career. Based on that qhote, the youngster knew full well what he had to work on during this past offseason. It has showed up in a big way through his first eight starts of the 2022 season.

Sure a lot of this has do with the ability of both Hill and Jaylen Waddle to make plays after the catch. But that’s part of McDaniel’s hybrid west-coast scheme dating back to his days as the San Francisco 49ers offensive coordinator. McDaniel is asking Tua to do certain things on the field. In turn, the quarterback has answered that call at nearly ever turn.

Related: Tua Tagovailoa and the NFL’s top QBs of 2022

Why Tua Tagovailoa is a top-end NFL MVP candidate

In the seven games that Tua has started and finished this season, Miami is a perfect 7-0. It is averaging a resounding 29.1 points per game in those outings. For comparison’s sake, Miami is 0-3 in games Tua doesn’t suit up for the duration. It is averaging just 16 points in those games.

MVP stands for most valuable player. It’s not about who the best player in the league is. If that were the case, Patrick Mahomes would likely win this award going away each season now that Aaron Rodgers is in regression mode.

But when comparing the top quarterbacks in the NFL against one another this season, Tua holds his ground in a big way.

More to the point. We know there’s players at other positions who deserve to be bandied about as potential NFL MVP candidates. Minnesota Vikings wide receiver Justin Jefferson continues to dominate. New York Giants running back Saquon Barkley has returned to form in a big way.

But short of a down season from quarterbacks, the league’s top individual award tends to go to this position. After all, Adrian Peterson was the last non-quarterback to win this award all the way back in 2012.

If we’re to look at solely quarterbacks, it has to be a three-man race right now between Tagovailoa, Mahomes and Hurts. All three are playing at high levels while leading their teams to first-place standings through 10 weeks.

With all of that said, it’s the change of narrative surrounding Tua that has been as a legitimate MVP candidate right now. He enters the Week 11 bye having put up three consecutive games with three-plus touchdowns and zero interceptions, something that all-time great Dolphins legend Dan Marino never did. Let that sink in.

It’s time to put some respect on Tua Tagovailoa’s name. He’s been legit this season. And in reality, there’s no reason to believe that’s going to change any time soon.