The Tampa Bay Buccaneers came out on top against the Dallas Cowboys in Thursday’s season opener by the score of 31-29 on a late-second field goal from Ryan Succop.

However, it was Tom Brady who led Tampa Bay on the game-winning drive after it looked like Dak Prescott and his Cowboys had pulled off an amazing road upset. Below, we look at the biggest winners and losers from the defending champion’s victory.

It’s amazing how joining Tom Brady can act as a career resurgence for players around the league. Brown, 33, is the most-recent and most-notable example of that. Years removed from his dominating days with the Pittsburgh Steelers, Brown returned to Tampa Bay on a one-year contract this past offseason. The seven-time Pro Bowler is not seen as a starter at this point. 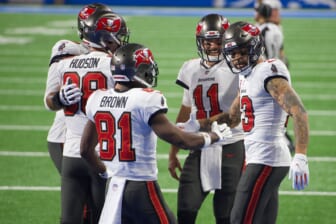 You wouldn’t know that by watching Brown’s performance Thursday evening. The talented receiver hauled in 4-of-5 targets for 118 yards and a beautiful touchdown in the first half alone. That helped jump start Tampa Bay’s offense in a game that its defense failed to step up in a big way. If Brown can duplicate that performance moving forward on the season, the defending champs are going to be nearly unbeatable.

This top-12 pick from Penn State has been billed as a potential NFL Defensive Rookie of the Year candidate after sitting out the entire 2020 season. Apparently, the rust of opting out played a role in Parsons’ regular-season debut.

Overall, Tom Brady completed 4-of-5 passes when targeting Parsons in coverage. This isn’t to rag on the stud young linebacker too much. After all, we’re talking about Mr. Tom Brady. Even then, to be lost in coverage like that against NFL-caliber talent can’t be seen as a good thing. It impacted Dallas in a big way here.

There were some minor issues I noticed with Dak Prescott in his first action since Week 5 of the 2020 NFL season. Some of that could have had to with rust. However, most of the issues were related to failing to get tight spirals on some passes. Remember, Prescott missed the entire preseason with a shoulder injury after suffering that devastating ankle injury last October.

Even then, Prescott was pretty much on his game throughout Thursday evening’s action. He took his first big hit, only to throw a touchdown to CeeDee Lamb in the process. All said, the Pro Bowl quarterback completed a whopping 42-of-58 passes for 403 yards with three touchdowns and the one interception that fell through Lamb’s hands. Not a bad for a dude that has not seen live-game action in 11 months.

What is there to say about this seven-time Super Bowl champion that has not been said? He’s 44 years old and still playing at an MVP level. That was magnified last season when Tom Terrific put up his best performance since back in 2015.

Outside of two interceptions (drop from Leonard Fournette and Hail Mary), Brady was on his game big time against an overmatched Dallas defense. He completed 32-of-50 passes for 379 yards with four touchdowns, including two scores to Rob Gronkowski. Brady also got Antonio Brown involved big time in this one. That should scare pretty much every other team in the NFL.

One of Brady’s two interceptions Thursday evening went directly through the hands of Leonard Fournette. Meanwhile, Ronald Jones lost a fumble in the first half. Two turnovers from Tampa Bay running backs that took potential points off the board and changed the momentum of the game.

On the ground, Fournette and Jones did very little to help create balance on offense. The two combined for 46 yards on 13 attempts for an average of 3.5 yards per tote. One of the reasons Tampa Bay earned a Super Bowl last season was the balance we saw on offense during the playoffs. That did not show up Thursday evening.

A game that saw CeeDee Lamb struggle also included Cooper picking it up when Dallas needed it the most. The Pro Bowler was Prescott’s favorite target throughout, catching 13 passes on 16 targets for 139 yards and two touchdowns.

Given that Michael Gallup left Thursday’s game with an injury and the struggles we saw from Lamb, Dallas might need this type of performance from Cooper moving forward. Just now entering his prime, the wide receiver could very well be up to the task.

Playing under the franchise tag, Godwin is expected to be a big-time performer for Mr. Brady in 2021. After all, the former Penn State star is averaging 70 receptions for 1,005 yards over the past three seasons.

Unfortunately, Godwin failed to step up when it counted the most Thursday evening. That included a fumble into the end zone after a catch with Tampa Bay looking to go up two scores late in the fourth quarter. That type of mistake coupled with multiple drops just isn’t acceptable.