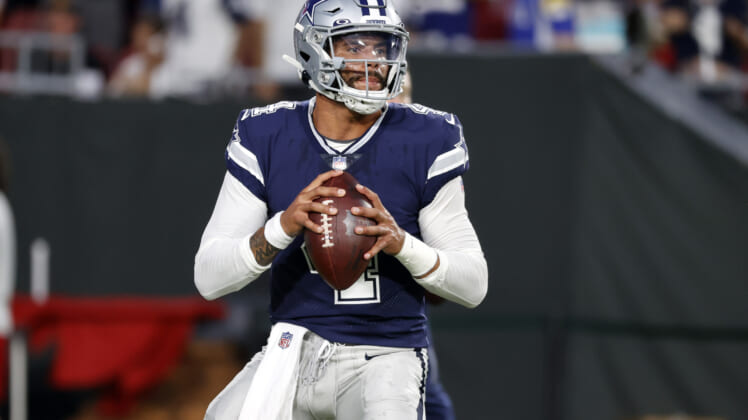 The Dallas Cowboys found themselves down 7-0 against the Tampa Bay Buccaneers in the first quarter Thursday evening. Dak Prescott was not having any of it.

Making his first appearance in live-game action since suffering a horrible ankle injury last October, Prescott looked like his old self.

That included the two-time Pro Bowl signal caller connecting with CeeDee Lamb on a 22-yard touchdown late in the first quarter to tie the game up.

There’s a few different things to look at here. Prescott delivered an absolute strike to Lamb despite seeing protection break down both a long the interior and the outside of the offensive line. Prescott was also hit big time on the play.

More than the highlight-reel touchdown pass, this is a clear indication that Dak Prescott is 100% recovered from the injury — both physically and mentally.

As for the game itself, Prescott completed 10-of-13 passes for 124 yards and that score to open things up. Two of those incomplete passes were due to Lamb drops.