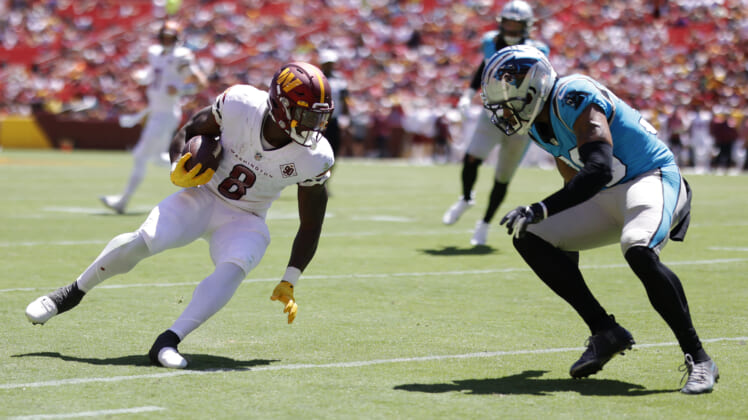 The first game of the Washington Commanders‘ franchise history is now in the books, even if it’s unofficial. On Saturday, the Commanders took on the Carolina Panthers for their first of three preseason games before kicking off their 17-game regular season in September.

While the Commanders lost 23-21, the third-string offense made a late rally to make things interesting in the final frame. What else did we see in their first test of the year?

Commanders general manager Martin Mayhew made a goal to improve the QB room in Washington, and he has to be happy with the early results. His trade acquisition Carson Wentz managed to lead one scoring drive out of his three opportunities, with an offensive fumble ending one of them, and a punt closing out another.

But, for it being his first time taking the field with his new team, Wentz was efficient while avoiding mistakes. Wentz completed 10-of-13 passes for 74 yards, displaying sharp accuracy in a strong debut.

Taylor Heinicke didn’t do anything special, completing 4-of-9 passes for 21 yards and an interception. This only made the decision to select Sam Howell in the fifth round of April’s NFL Draft look even better.

When the rookie got his chance with the third-string offense taking the field in the third quarter, the Commanders trailed 17-6. His first two drives were three-and-outs, ending in a punt. But the 21-year-old North Carolina product led touchdown drives on his next two chances to bring the final score within two points.

Howell was the most productive of the three Washington QBs, completing 9-of-16 passes for 145 yards, but he also took two sacks, resulting in 11 yards lost. Just like we saw at times in college, Howell showed off his mobility by gaining 19 yards on three attempts, two of which were rushing touchdowns. Even though the Commanders took the L, the future at the quarterback position looks brighter than it did a season ago, and that’s a win.

Don’t get me wrong, Antonio Gibson is this team’s starting running back after gaining 1,336 yards from scrimmage in 2021, but fumbling has been one of his biggest weaknesses, and those issues popped back up on Saturday. Gibson had just four carries, totaling two yards, but it was the fumble when his knee was nearly down that ruined his day.

What was even more telling was seeing Gibson work in with the second-team offense with Heinicke under center while another player stole his touches with the first-team crew.

Brian Robinson Jr., the rookie third-round pick out of Alabama, led the team with six carries, ending up with 26 yards and a touchdown. He ran hard and used his physicality to his advantage. If he can continue to punish defenses, we could see Robinson a lot on Sundays in 2022.

After the defense took a step back in 2021, you can bet Ron Rivera’s been harping on his group to make drastic improvements in 2022. They took a good first step in their first preseason game, playing fast and free. Rivera’s crew was physical and imposing, leading to three sacks on the day and a whopping ten QB hits.

They also limited their opponents by allowing just 17-of-38 passes to be completed. Maybe that’s a partial product of Carolina also figuring out their QB situation and their offense in general, but it’s still better than the alternative.

Washington also held up in rush defense, allowing the Panthers to average just 3.1 yards per carry on 30 attempts. Not bad, considering the Commanders also were without some of their top players, such as Chase Young.

These new Commanders uniforms continue to grow on me. Upon their initial reveal, I was thrilled to see a black jersey as an alternate, but the white versions are just as clean. The designers did a good job of making sure the jerseys weren’t generic in any way. Both the numbers and the sleeves feature intricate designs that really pop out on TV.

While we’ve only been able to see the white jerseys so far, I’m betting the burgundy and black uniforms look just as good.