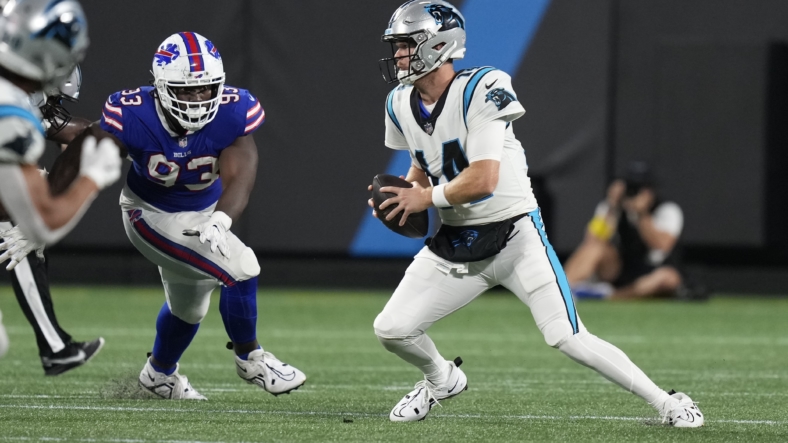 Baker Mayfield had already won the Carolina Panthers‘ quarterback battle. But that only means Sam Darnold was one play away from re-entering the starting lineup, only hopefully with a healthier Christian McCaffrey by his side. Instead of Darnold being one play away from hitting the field, now it may be PJ Walker who’s on deck.

Unfortunately, Darnold also seems to have suffered a leg injury, likely to his ankle and had to be carted off in the third quarter.

Here’s the play, which is a bit gruesome.

Carolina had another quarterback on the roster, but third-round rookie Matt Corral suffered a Lisfranc injury in Week 2 and is now out for the season.

For Darnold, this is yet another tough blow in his career. He had just lost the starting QB gig to Mayfield, and now he may be looking at an extended absence, having to rehab an injury as well. Darnold, a former No. 3 overall pick, is just 25 years old but has missed games due to injury in each of his first four seasons and may not be available for the start of the year in 2022 either.

Even though Mayfield had the starting job to begin the year, Darnold was preparing to stay ready, hoping for his number to be called at some point this season, perhaps even within the first few games. Now, who knows what to expect, but Mayfield’s grip on the starting job may have just gotten a lot stronger, depending on the severity of Darnold’s injury.

We should receive an update on Darnold sometime tomorrow, likely after MRI results are revealed. For now, Ian Rapoport passes along the belief that Darnold suffered a high-ankle sprain, but we’ll know more tomorrow. If a high-ankle sprain is the official diagnosis, while tougher to bounce back from than a lower ankle sprain, it’s a lot better than the alternative.