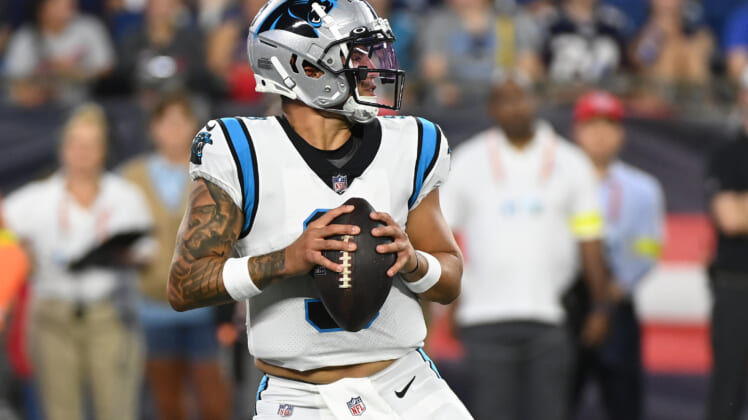 Update: Carolina Panthers head coach Matt Rhule says that Matt Corral suffered a Lisfranc injury and is likely out for the season.

The Carolina Panthers weren’t expected to count on rookie quarterback Matt Corral in 2022. They have Baker Mayfield and Sam Darnold as the top quarterbacks on the depth chart, and they also have football journeyman P.J. Walker on the current 85-man roster as well.

But that doesn’t mean Corral may not factor in at some point throughout the season. We have no idea what the future at QB may look like for Carolina in 2022. Maybe Darnold even gets traded elsewhere, if Mayfield officially gets the starting nod in Week 1.

In that case, the Panthers could find themselves either relying on Corral down the stretch should an injury to QB1 occur, or possibly just want to get a look at their third-round rookie if the season starts going in the tank late in the year.

Unfortunately the current plans in Carolina could have a wrench tossed in. With both Darnold and Mayfield sitting out of the team’s Week 2 preseason loss, it gave Corral an extended look, where he played most of two quarters before being forced out of action.

Late in the fourth quarter Corral had to leave the game due to injury. The former Ole Miss QB was then seen with a boot on his left foot after leaving the locker room on Friday night. The team has yet to provide a further injury update, but it is believed they are awaiting the results of an MRI.

We’ll keep you updated on Corral’s injury outlook once more is known.

The Panthers close out their preseason next week when the Buffalo Bills come to town on Friday, Aug. 26. They hope Corral is healthy enough to go, so he can continue taking reps, getting used to the advanced speed of the NFL, but even then the Panthers shouldn’t have to rely on a rookie if their season goes the way they’d like.