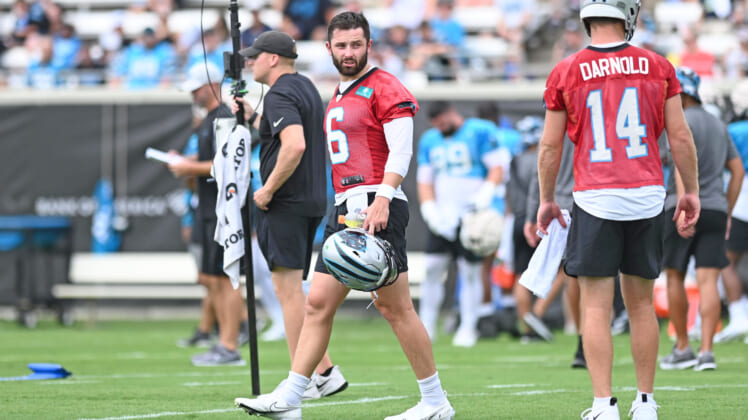 There are 1,024 NFL players currently on a roster who won’t have a spot on the final 53 once August 30 rolls around. While over a thousand players are currently competing their tails off, the position battles everyone wants to know about are the starting QB competitions.

There are three teams holding a training camp battle to determine their starting quarterback for the 2022 season. To this point, it’s anyone’s guess who will begin the year as starters in Carolina, Pittsburgh and Seattle. But it never hurts to make some predictions based on what we know so far. Down below, we’ll dive into who we feel will win the starting QB competitions this preseason.

This may be the most fascinating QB battle the NFL has seen in some time. In one corner, you have Sam Darnold, 25, the third overall pick from 2018.

In the other corner stands Baker Mayfield, 27, the first overall pick from the same draft class as Darnold.

These two quarterbacks have been competing with one another in some form dating back to college when Darnold was at USC and Mayfield was at Oklahoma. Obviously, Mayfield won the first battle, becoming the first overall pick. Since they entered the league, the comparisons haven’t stopped. Everyone always wants to compare the QBs, trying to determine who’s career is off to a better start.

But here we are, four years after the fact, and the general public is still split on who’s the better option. Both have flashed talent. Mayfield led an 11-5 season that included a playoff berth in 2020 before battling through several injuries and being widely inaccurate last season.

Whereas Darnold got off to a great start with his new team, starting 3-0 before the wheels fell off as his playmakers also missed time with injury. Now they find themselves on the same team, competing for the same job. They both know the stakes and how it would look to lose to the other. But they also know that just because a starter is named, it doesn’t mean the other couldn’t still take over later in the year if the winner struggles.

The thing is, the Panthers already got a taste of Darnold last season, and they weren’t sold on him being the long-term solution. They were still flirting with drafting a quarterback in the first round, and they eventually did take Matt Corral in the third round, but clearly, the fascination with Mayfield was too much to pass up.

Being that Mayfield is the newcomer, and he has yet to fail with his new team, we believe he’ll win the Panthers’ starting QB competition. In fact, all he may need to do is prove he’s 100% healthy, and that alone may be enough to swing the decision in his favor. Because even at Darnold’s best, he still hasn’t been able to perform at the level Mayfield has. Mayfield’s season last year was ugly, but he has been a better QB in his career than Darnold has. Those are just the facts.

The preseason hasn’t drastically separated the two, as Mayfield has attempted just seven passes, while Darnold has attempted three, but do far signs still point to Mayfield winning the gig.

This competition comes down to whether Seattle Seahawks head coach Pete Carroll prefers the nine-year vet in Geno Smith, who already knows the offensive system or the unproven fourth-year pro in Drew Lock. While they were picked six years apart from one another, Smith was the 39th pick, and Lock was the 42nd, neither have lived up to their draft pedigree.

Yet, both players do appear to at least be competent backups. Only, that’s not the gig here. The Seahawks are hoping to find a starter out of this bunch. Can it be done?

Clearly, the 31-year-old QB still battles some inconsistency issues that have haunted him his whole career.

Both players have above-average mobility, and a bit of zip on their passes but are also quite inaccurate. What the ‘Hawks need to see is a QB who can build the best chemistry with their talented group of pass-catchers. When you have DK Metcalf, Tyler Lockett, and Noah Fant, it should be tough to fail. It’s a group of receivers many other teams are jealous of, but no one is jealous of their QB situation because it’s the worst in the league.

If I’m coach Carroll, I’m taking a chance on the 25-year-old Lock. He hasn’t gotten nearly the same opportunities as Smith has in his career, and there was a time when draft analysts thought he could be a first-round pick after a strong career at Missouri. He’s never made more than 13 starts in a season, meaning he hasn’t gotten a ton of run. But being in Seattle, he’s surrounded by the most talented group of pass-catchers he’s ever had. Maybe that’s all he needs to hold down a starting gig.

Of the three NFL QB battles around the league, the Pittsburgh Steelers’ situation features the most upside. Though it’s tough to tell just how much of a competition this is.

To this point, it seems Mitchell Trubisky is in the driver’s seat. He was the first QB added this offseason before later lucking into Kenny Pickett falling to them at No. 20.

Trubisky is a former No. 2 overall pick back in 2017. He’s still just 27 and is coming off a humbling year in which he signed on to be the backup to Josh Allen, knowing he’d have no shot at even competing for playing time.

But the guidance he received from now-New York Giants head coach Brian Daboll may have been invaluable. Buffalo helped Allen drastically improve from year to year, when he couldn’t hit the broad side of a barn, to becoming who many regard as the best quarterback in football.

One has to wonder what Trubisky learned and improved on from his lone year learning in Buffalo. Not only that, there’s a curiosity to whether he ever even received the proper training and coaching under Matt Nagy in Chicago. What if Trubisky is just this sleeping giant no one has seen at his best yet?

The dude has above-average athleticism, can make throws on the run, and is certainly Pittsburgh tough. He also led his team to the playoffs twice, and the Steelers may feel they can replicate his approach behind a strong running game and hopefully an improved defense. They may not need Trubisky to live up to his lofty draft standards, they just need a capable game manager who won’t put the team in position to lose.

Then there’s Pickett, who’s done nothing but dominate in the preseason. We know it’s just preseason, but when comparing one player vs the other, it’s Pickett who’s shined and Trubisky who has done just enough not to lose the job, but not quite enough to scramble away either.

Starting with a rookie is a trap, as once you put him in the starting lineup, there’s no turning back. We can’t go from Pickett to Trubisky, as that’s sending a bad message to your rookie QB, possibly risking a situation where you begin to damage his confidence.

But it doesn’t matter, Pickett has the higher ceiling, and he doesn’t look lost. The Steelers have to go with the rook, and take whatever lumps of coal come their way this season. It’s worth it in the long run.

This contradicts my previous feelings, where Trubisky was initially penciled in as the starter, but Pickett’s performance has been too strong to ignore. In reality, the Steelers have a pretty good QB situation. No matter what they’re in better hands than they were with a hobbled and beaten up Ben Roethlisberger when he was on the back nine of his career.

The safe pick is starting out with Trubisky, as you can always go to Pickett later, and perhaps provide your locker room with a boost. But the Steelers are probably eager to determine whether Pickett is the real deal, and if he is, it’s better to get him the experience now, helping him be better equipped should another trip to the postseason become reality instead of a possibility.