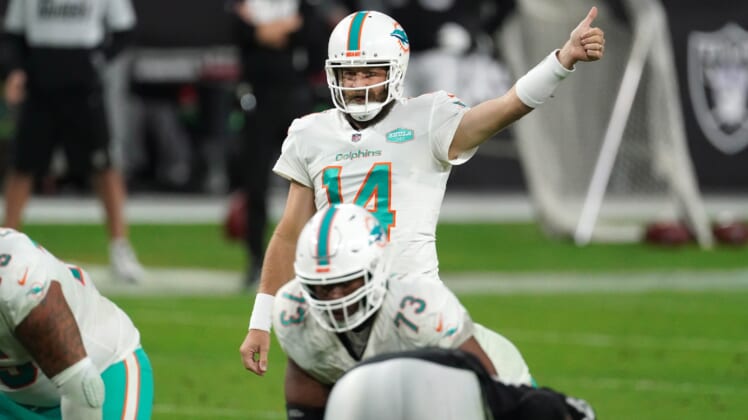 It’s just a matter of time before 38-year-old quarterback Ryan Fitzpatrick lands with a team once NFL free agency opens next week. A veteran of 16 seasons, Fitzpatrick has turned a once-fledgling career as a journeyman backup into something much more.

Whether Fitzpatrick earns a starting job in free agency or is forced to compete for one during training camp remains to be seen. But one quarterback-needy team has been bandied about as a possibility.

Could Ryan Fitzpatrick land with the New England Patriots?

NFL Media’s Ian Rapoport appeared on the Rich Eisen Show Thursday to discuss the free agent and trade markets at quarterback. He dropped a little nugget about Fitzpatrick being a perfect fit for the Patriots. In fact, Rapoport suggested that it might end up happening.

In all honesty, this makes more sense than any of the NFL rumors we’ve read surrounding the all-important quarterback position. Despite some big names likes Deshaun Watson and Russell Wilson apparently being on the block, the Pats have not been bandied about as a possible destination. They also were not in on Matthew Stafford or Carson Wentz before they were dealt earlier in the offseason.

This seems to suggest that New England is looking for cheaper alternatives, both from a financial standpoint and when it comes to compensation in a potential trade. This is magnified by the fact that Bill Belichick and Co. have been linked to San Francisco 49ers signal caller Jimmy Garoppolo.

What we do know is that Ryan Fitzpatrick would be an absolutely perfect fit in New England. Objectively, one can also conclude that he’s an upgrade over 2020 starter Cam Newton.

However, Fitzpatrick has picked it up big time in recent years.

After leading the league with 23 interceptions as a member of the Buffalo Bills back in 2011, it seemed that Fitzpatrick was on the verge of seeing his career end.

He acted as a part-time starter for the Bills in 2012 and Titans in 2013, accumulating 38 touchdowns against 28 interceptions. Since then, Fitzpatrick has been a starter-quality asset as a stopgap option.

Outside of 2016 and 2017, Ryan Fitzpatrick has proven himself to be a pretty solid veteran option for the multiple teams he has suited up for.

In terms of the Patriots’ potential interest, it would be under the guise of him holding down the fort over the short term. In this scenario, Belichick and Co. would likely look for a quarterback during the 2021 NFL Draft. We previously broke down some options in that regard.

In reality, it almost makes too much sense for this to happen.