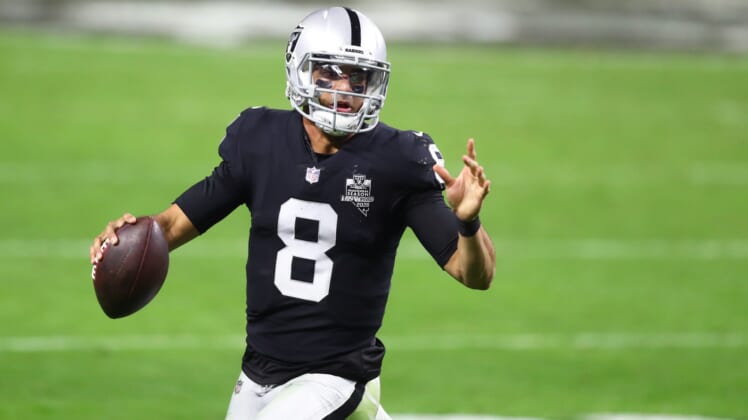 The quarterback carousel has been pretty crazy during the 2021 NFL offseason thus far, and could get even wilder if Deshaun Watson and Russell Wilson end up changing teams.

But it costs so much to land someone like Watson or Wilson. There are solid, bargain-style solutions for needy teams at the QB spot who can come in and be serviceable starters in 2021.

Whether it’s young players who’ve never really gotten the chance to shine, veterans who need a true second chance or journeymen who finally piece everything together, here are the five best quarterback bargains of the 2021 NFL offseason.

That’s probably what NFL commissioner Roger Goodell will say on draft night, verbatim. In no uncertain terms, it spells the end for Darnold in the Big Apple, and he’ll go down as a draft bust until he proves otherwise.

Well, that’s the thing. It’s not as if Darnold is lacking talent. He’s been through multiple coaches, including Adam Gase, and didn’t have a great offensive line, weapons around him, or a solid team in general to help lead the Jets into a thriving new era.

Darnold has all the physical tools you want, though. A strong arm, exceptional athleticism to extend plays and rip off yards with his legs, along with a quieted, collected presence under center.

Unfortunately, some of the bad habits that plagued Darnold at USC, namely dubious decision-making and resultant turnovers, have carried over to the NFL. But get him a new team, with a better offensive coach, a strong running game and a decent defense to complement him, and we could very quickly see why Darnold was drafted third overall in 2018.

Also bear in mind that Darnold is only 23 years old. There’s some scar tissue to be sure from his time in New York, yet there’s plenty of time for him to recover and still be the decade-long franchise signal-caller the Jets hoped they were getting.

Arthur Smith revived Ryan Tannehill‘s career in Tennessee. It turns out, Tannehill was indeed a first-round talent who just needed to get away from Gase, much in the way Darnold may soon discover when the Jets inevitably trade him away.

The Titans’ former offensive coordinator is now the Atlanta Falcons’ head coach. Smith was the fifth different play-caller Mariota had to deal with in Nashville, and it was probably all a little bit too much to take. Injuries also stunted his time in Tennessee, leading Mariota to leave for Las Vegas.

Even Jon Gruden’s complex system hasn’t proven too difficult for Mariota to grasp. When he got his primetime shot in Week 15 last season against the Los Angeles Chargers, Mariota balled out in place of an injured Derek Carr, flashing the ability that once made the Titans draft him second overall.

Unlike his draft classmate Jameis Winston, who threw 30 interceptions in his last crack at a starting gig, Mariota doesn’t have a penchant for turnovers or boneheaded off-field choices to accompany those errors on the gridiron. He’s a dynamic athlete, a gifted thrower and one of the truest dual-threat QBs in the league.

Whether it takes a Day 2 draft pick and taking on a very modest $11.35 million cap hit in 2021, or if it means waiting until the Raiders release him if it comes to that, there’s plenty of reason for teams to take a crack at Mariota as a reclamation project.

Mariota’s narrative could play out very similarly to Tannehill’s. The 27-year-old field general just needs the right system to play to his strengths, and a good cast of pass-catchers to throw to.

A rumor has surfaced that Fitzpatrick will retire. Who can blame him for being sick of being cast aside? You don’t think he’d come running if a team like New England or Washington called, offering a true chance to start in 2021?

Can we just run through the eight different starting quarterback situations Fitzmagic has been thrust into over all these years?

Three starts with the declining, Marc Bulger-led Rams as a rookie seventh-round pick out of Harvard. Not ideal. Spot duty for the Cincinnati Bengals during 2008, when Carson Palmer started four of the first five games and lost all of them. Not ideal.

Then came four years of toiling away as a member of the Buffalo Bills, in the midst of the New England Patriots’ dynasty. Fitzpatrick got a big contract for a spurt of strong play, but didn’t live up to it, because it’s hard to when you’re playing in Buffalo in the pre-Josh Allen era.

Next on the Fitzpatrick journey was a one-year stop in Tennessee, where he started nine games for the Titans in 2013 while spelling an injured Jake Locker, followed by a 6-6 starting record effort in Houston.

Fitzpatrick’s next act? Leading the New York Jets of all teams to a 10-win season in 2015, only for the bottom to fall out the next year. Because it’s the Jets. Another AFC East team who couldn’t hang with New England.

A couple seasons in Tampa Bay and Miami respectively after that, where younger quarterbacks were constantly looking over his shoulder, led to some natural inconsistency.

See where this is going? Give Fitzmagic the reins! Let him do that work! Allow him one last shot at glory in the twilight of his career. At age 38, Fitzpatrick proved he still has it in 2020 when he led a stunning comeback in place of Tua Tagovailoa in Week 16 and posted Pro Football Focus’ 19th-highest grade at the position.

Let’s call it like it is: The Patriots didn’t give Newton a real chance at success last season. He came in late, had to learn an offense tailored to Tom Brady‘s skill set for two decades, which was retroactively fitted to some of his strengths. There were flashes of brilliance, but a dearth of talent at the skill positions doomed Newton to a 7-8 record as starter.

Offensive coordinator Josh McDaniels hardly did Newton any favors in 2020. All that as context, the recent news of a reunion makes sense, considering the Patriots are too far down the first-round draft order to land a top quarterback prospect and aren’t likely to get in on the sweepstakes for Watson or Wilson.

In any event, Newton is a former NFL MVP who did what he could with what he had in New England. If the Pats upgrade the skill positions and are better able to capitalize on what Newton does best in Year 2, they can contend for the playoffs. They also only signed him to a $14 million deal, which is way cheaper than what his talent level is.

Another scenario, one where the Pats trade him if they find someone they believe to be an upgrade, could well see Newton reunite with his former Carolina head coach Ron Rivera on the Washington Football Team. There’s a familiarity factor there, and Washington is a decent QB away from repeating as NFC East champions.

The lowered salary cap and Newton’s willingness to play for minimal money last year limited his earnings upside — much to the delight of New England. However, it could wind up leading to a much bigger multi-year payday when the cap goes up in 2022 — and may result in a return to form if the roster around Newton is actually playoff-caliber.

The Jaguars own the first overall pick in the draft, and are likely to use it to install Trevor Lawrence as their new face of the franchise. That means any chance Minshew had before at getting a true crack at the Jags’ starting QB job can be put to rest.

With that comes the opportunity, of course, for Minshew Mania to spring up somewhere else in the NFL. Still on his extremely inexpensive rookie contract as a former sixth-round pick, Minshew is quite obviously a steal when it comes to value considering his NFL performance to date.

Working under, shall we say, less than ideal circumstances in Duval County, the 24-year-old has thrown 37 touchdowns to only 11 interceptions in 23 games played. He saw his completion percentage jump from 60.6% as a rookie to 66.1% in Year 2. His passer rating is a healthy 93.1.

Oh, and he’s a deceptive athlete who’s racked up 497 yards on 93 carries. What more do you want from a guy who was playing for a lame-duck coaching staff and a team that was clearly in the midst of a rebuild over the past two seasons?

Minshew hasn’t been given a fair shake to show what he can truly do in the pros. Any team that just wants competition brought to its QB room will get it from Minshew — and who knows, may even wind up with the steal of the NFL offseason if he thrives as a starter in 2021.