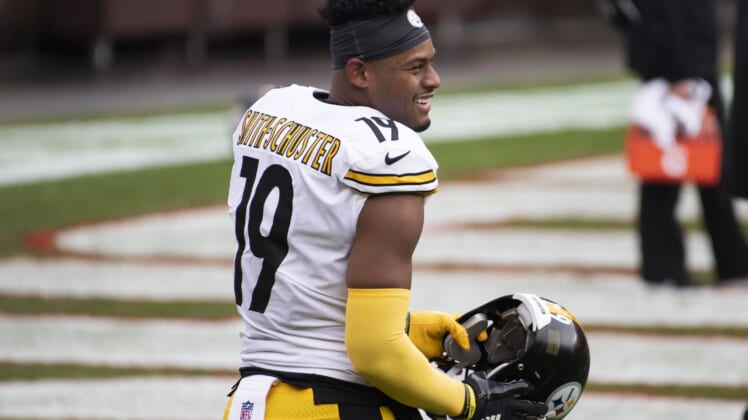 The Jacksonville Jaguars are in the enviable position of not only possessing the No. 1 overall pick in the 2021 NFL Draft, but also having the most salary cap money to spend in free agency.

A new regime led by head coach Urban Meyer and general manager Trent Baalke has the financial means to spark an instant turnaround and make the Jaguars AFC South contenders in 2021.

Here are the top five open-market targets Jacksonville should pursue as it figures out how best to spend its embarrassment of riches.

One area where the Jaguars clearly lack on the front seven is veteran talent on the edge. They have a couple young building blocks in first-round picks Josh Allen and K’Lavon Chaisson, yet both are pretty bad at setting the edge against the run, which is a huge problem. Chaisson didn’t even look ready to start as a rookie, which is understandable given the lackluster personnel around him.

In any case, Floyd is someone who can get it done in the running game and also has the high-end pass-rushing chops to complement that. He’s a complete player who came into his own with the Los Angeles Rams last season. They have no way of affording him on the open market, so this is where the Jaguars can get aggressive to upgrade a key area.

Floyd may not be the splashiest acquisition on his own, but paired with someone like Allen makes the match more appealing. He’s learned under some of the best defensive coaches in football in Vic Fangio and Brandon Staley, and can take some of those nuanced skills to help mentor fellow first-round picks in Allen and Chaisson.

An underrated element to Floyd’s game is his ability to operate in space when he drops in pass coverage. Pro Football Focus ranked him fifth among qualifying edge defenders last season in coverage grades, so that’d allow Chaisson, Floyd and Allen to all be on the field at the same time in obvious passing situations and keep opponents guessing as to who’s coming on the pass rush.

After a 10.5-sack season in which he also had 55 combined tackles, 19 quarterback hits and 11 tackles for loss, Floyd has proven he can impact any area of the game on defense and is thus deserving of the investment from Jacksonville.

The Pittsburgh Steelers already have three younger, strong receivers on their roster, so re-signing Smith-Schuster seems unrealistic given their surplus of cost-effective talent at the position.

With that in mind, the Jaguars could use a player entering his prime from an historic organization like Smith-Schuster to help lead their offense.

Jacksonville will in all likelihood draft Clemson’s Trevor Lawrence or BYU’s Zach Wilson first overall, which will immediately give the passing game a spark it didn’t have before. While D.J. Chark and Laviska Shenault Jr. are a promising young receiver duo, there’s no experienced presence at the position right now.

Despite his relative youth at age 24 and some maturity issues that included pregame taunting last season, there’s no denying Smith-Schuster can flat-out get it done on the gridiron. To his credit, he also served as a mentor to James Washington, Diontae Johnson and Chase Claypool in Pittsburgh, so he’s helped bring along fellow young wideouts before.

Smith-Schuster taking on a similar role in Jacksonville while providing its young signal-caller with an instant go-to target who had 111 catches in 2018 and 97 receptions last season would make the Steelers Pro Bowler a huge bargain on the open market.

Unlikely to command the same attention as other top-tier wideouts like Chris Godwin, Allen Robinson and Kenny Golladay, Smith-Schuster can be confident in being “the man” with the Jaguars, who’ll probably pay him top dollar to be their new No. 1 receiver.

A Florida native returns to the Sunshine State in this scenario.

Although Peterson only saw the playoffs twice in Arizona and may want to go to a more obvious contender, no one can pay him more than Jacksonville, and the AFC South is for the taking if the Jags play their cards right this offseason.

There’s a common theme of mentorship going on with these Jaguars free agency targets, but it’s important for a young team to have enough leaders who can help transform the culture. Meyer definitely understands the importance of this, even if he hasn’t coached at the NFL level before.

Cornerback should still be a priority in the draft, even after the Jags used a 2020 first-round selection on C.J. Henderson. How awesome would it be for him to have someone like Peterson showing him the ropes? Jacksonville really didn’t have a plan outside of Henderson last season, and it showed as the team struggled to a 1-15 record.

Not to mention, Peterson should be refreshed by a change of scenery after a decade with the Cardinals, and this prospective homecoming should be particularly attractive to him. Still only turning 31 in July, there’s reason to believe Peterson can still be a Pro Bowl-caliber player as long as he stays healthy.

Since the Chargers don’t really need Henry, franchise tagged him in 2020, and shouldn’t overpay for him given that they have solid receivers and a stud second-year signal-caller in Justin Herbert, the dynamic pass-catcher is a great fit for Jacksonville.

Where else will Henry be able to make such big money? No place. Plus, he’ll get another stud QB to catch passes from, and will be an immediate go-to option in the offense.

Jaguars offensive coordinator Darrell Bevell has been able to work with the likes of Jimmy Graham and T.J. Hockenson in his prior stops with Seattle and Detroit respectively. He knows how to capitalize on premier receiving talent at the tight end position while still building his system around the run and the play-action passing game.

There’s no one in Jacksonville’s current tight end room who scares the defense in any way. Henry would definitely change that, and proved to be a reliable security blanket for Herbert’s rookie campaign en route to 60 receptions for 613 yards and four touchdowns.

Still only 26 years old, Henry can be part of the Jaguars’ youth movement while providing yet another vertical threat to pair with Chark in the team’s passing attack. That’d open up plenty of room for Shenault and others to work underneath, not to mention plenty of running lanes for Robinson.

The Minnesota Vikings are among the many teams in difficult salary cap straits, and they may lose Harris as a result.

Conceivable as it is that he could take on a backloaded contract and keep the Vikings’ core intact after playing under the franchise tag in 2020, it’d be hard for Harris turn down a lucrative, long-term contract with Jacksonville.

Harris doesn’t fill the biggest position of need per say, yet the Jaguars don’t have a surefire star in their secondary. His arrival would mean Jacksonville could develop one of the best safety groups in football in the years to come led by Harris and Jarrod Wilson.

Versatile third-year undrafted free agent Andrew Wingard is another player to watch. He lined up at free safety for 177 snaps, box safety for 138 plays and slot cornerback for 57 snaps in 2020. Wingard rated as PFF’s 31st-ranked safety — and that was in the midst of a pretty poor environment for player development. He also had to play lots of special teams.

If Wilson and Wingard are the only decent safeties the Jaguars can count on heading into next season, they’re in trouble. Adding Harris to the mix would be an absolute game-changer, and there are few better organizations than Minnesota to pull quality defenders from, considering how highly regarded Vikings head coach Mike Zimmer is for his expertise on that side of the ball.

Provided Harris can bring some of that to the Jags’ locker room, it bodes well for their outlook in 2021 and beyond.