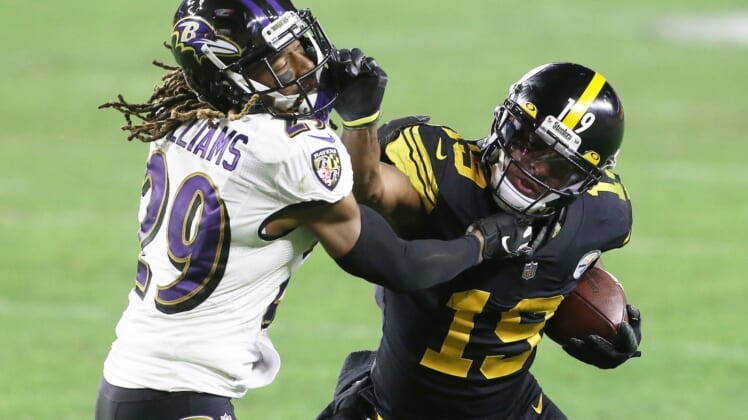 The expectation here over the short term is that we’ll hear Pittsburgh Steelers rumors relating to a mass exodus of veteran players. Remember, there was some talk about Super Bowl champion quarterback Ben Roethlisberger departing after 17 seasons with the team.

There’s a rather simple reason for this. Pittsburgh finds itself in salary cap hell. The team is currently $8.61 million over the estimated 2021 NFL salary cap. It also has a ton of key players set to hit NFL free agency, stars JuJu Smith-Schuster and James Conner included. Given the Steelers’ cap situation, it looks like both could be gone.

“The Steelers have to address the running back position in the draft. Though a fan favorite for his ties to the community and battle with cancer, James Conner is unlikely to be re-signed and the Steelers need a new No. 1 back,” Brooke Pryor of ESPN noted recently.

Indeed, Conner is a fan favorite in the Steel City. He overcame a battle with cancer while playing for the Pitt Panthers, only to show out big time after the Steelers made him a third-round pick in the 2017 NFL Draft.

Connor recorded a whopping 1,470 total yards and 10 touchdowns at a clip of 5.4 yards a touch in replacing holdout Le’Veon Bell as a sophomore in 2017. Once Bell departed in free agency, the still-young back struggled big time. This past season saw Conner averaged just 4.6 yards per touch and record less than 940 total yards.

Despite this, the expectation is that Conner will be met with a solid free-agent market once things open up around the NFL later in March. Pittsburgh likely won’t be in position to remain competitive in said market.

Spotrac estimates that Smith-Schuster will be met with an NFL free agent market that values him at roughly $16 million annually. In no way is Pittsburgh going to be able to afford that.

“With what he’ll command on the open market and the Steelers’ cap troubles, Smith-Schuster is likely gone, leaving the Steelers with a need to fill the slot position,” Pryor noted in the above-linked article.

That fits in with suggestions from other places that Smith-Schuster is as good as gone from Pittsburgh after four pretty darn good seasons.

Much like Conner, he has fallen on somewhat hard times over the past couple years. The former USC standout recorded 111 receptions for 1,426 yards back in 2018. Over the past two seasons combined, he’s tallied 1,383 yards. Even then, the 24-year-old pass catcher will draw significant interest on the open market.

All of this seems to indicate that Pittsburgh is going to have to hit big time once the 2021 NFL Draft comes calling. Running back should be an early-round target for general manager Kevin Colbert.

If either of North Carolina’s star running backs, Javonte Williams or Michael Carter, is available in Round 2, look for the Steelers to pounce. Heck, former Alabama standout Najee Harris could be an option with the 24th pick in the first round.

Wide receiver is a bit lesser of a need with the likes of James Washington, Chase Claypool and Diontae Johnson on the roster. Even then, we can expect Pittsburgh to target that position at some point given the success it has had selecting wide receivers in recent years.