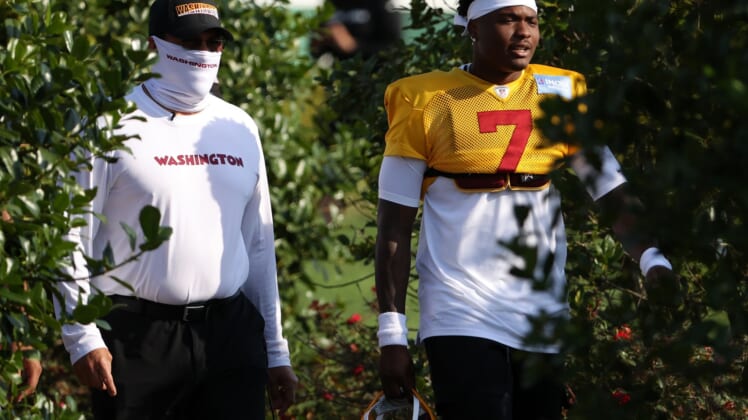 In a revealing recent interview, Rivera confirmed suspicions that Haskins didn’t work hard enough, or consistently enough, to be a starting NFL QB. However, he did acknowledge Haskins has the talent to live up to his draft billing.

Ron Rivera on Dwayne Haskins: ‘Something keeps getting in the way’

Nicki Jhabvala of The Washington Post documented what Rivera said to Fox Sports personality Colin Cowherd in a podcast, which revealed a little more about what was going on behind the scenes with Haskins:

Young players are supposed to go through at least some growing pains early in their NFL careers, but Haskins’ issues seemed to be self-inflicted. Rivera has consistently praised the arm talent Haskins possesses, and it was certainly superior to what Alex Smith had to offer last season.

However, instead of taking a chance that Haskins would mature, Rivera opted to get out ahead of that and sever ties with him.

Washington wound up acquiring a journeyman in Taylor Heinicke who started in the playoffs against the eventual Super Bowl champion Tampa Bay Buccaneers. Heinicke played at a high level and threw for over 300 yards, which — not to discredit Heinicke at all — underscored just how bad Haskins seemed to be.

It didn’t take too long for Haskins to find a new home in the NFL, as he signed with the Pittsburgh Steelers to compete with Mason Rudolph for the backup job behind Ben Roethlisberger.

Rivera emphasized just how much ability the 23-year-old has, and reiterated his belief that if Haskins does figure out the mental aspect of the game and prepares like a true pro, he’ll thrive as a starter. That upside led the Steelers to take a chance on Haskins, yet he’s hardly a slam dunk to succeed going forward.

If Haskins is going to thrive in Pittsburgh, he’s going to need to take Rivera’s words to heart here. Big Ben isn’t exactly known to be a workout warrior or film session grinder, which may have a negative impact on Haskins’ development as he tries to make the most of his second chance.

One thing is certain: Haskins looked overwhelmed — and like a field general who wasn’t prepared to go to battle on NFL Sundays when he was in the nation’s capital. Unwanted by the coaching staff that preceded Rivera’s, and obviously struggling amid a 2020 season that made learning a new system especially difficult during the COVID-19 pandemic, the deck was always stacked against Haskins.

All that said, Haskins’ draft status suggested he had the mental makeup and physical tools to overcome all that and produce like a franchise quarterback. It wasn’t meant to be in Washington. He went 3-10 as a starter, with a bad 74.4 passer rating.

For someone who has such a rocket for a right arm, it was especially disappointing that Haskins didn’t develop enough to fully capitalize on his downfield throwing ability with the Football Team. He’s averaged only 5.4 air yards per attempt in the NFL to date, almost half of the 10.3 average from his 50-touchdown season at Ohio State.

Again, it feels like the sky is the limit for Haskins from a pure throwing standpoint. Paying attention to the finer details of his mechanics — namely cleaning up footwork and tightening up his delivery — will only aid his accuracy, as will an increased understanding of schemes.

The hope is he sits behind Big Ben for a year, and then take over the offense in 2022. That’s maybe the best succession plan the Steelers have had for Roethlisberger in a long time, which just goes to show how poorly they’ve prepared in that regard as an organization.

Haskins is a fine bargain for now. With the uncertainty he brings to the quarterback room, though, don’t be surprised to see Pittsburgh draft another signal-caller for added competition at the position.