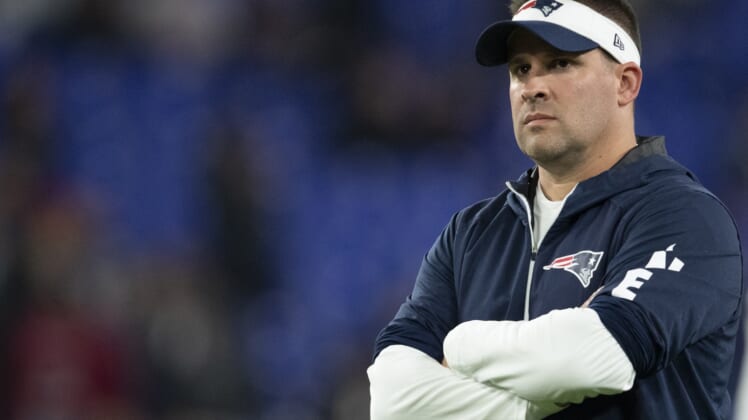 NFL rumors: New England Patriots offensive coordinator Josh McDaniels has been one of the most popular NFL head coaching candidates every year. As another offseason approaches, with a growing list of vacancies across the NFL, McDaniels’ hopes of becoming a head coach again might be evaporating.

In recent years, McDaniels has received plenty of interest from NFL teams. During the 2020 coaching cycle, he interviewed with the Cleveland Browns and was pursued by the Carolina Panthers and New York Giants. However, that interest reportedly won’t be there this offseason.

According to Pro Football Network’s Tony Pauline, there is likely only one scenario that would lead to Josh McDaniels becoming head coach for an NFL team in 2021. It would take that organization hiring Patriots director of player personnel Nick Caserio as their general manager.

Caserio is a popular candidate in his own right. He was pursued by the Houston Texans in 2019, before the Patriots filed tampering charges. New England dropped its claims after Houston agreed to no longer pursue him. Caserio is reportedly a candidate to become the Carolina Panthers general manager, but Carolina has head coach Matt Rhule in place for years to come.

If there is declining interest in McDaniels around the league, it can’t be considered too surprising. The 44-year-old’s resume, both as a head coach and coaching candidate, is littered with red flags.

McDaniels came up the ranks on Bill Belichick’s staff, first serving as a personnel assistant in 2001. By 2004, he became the team’s quarterbacks coach then held the offensive coordinator title from 2005-’08.

He was hired as the Denver Broncos head coach in 2009. Away from the Patriots, McDaniels posted an 11-17 record in two seasons. In 2010, shortly before being fired, McDaniels’ Broncos were disciplined by the NFL for illegally videotaping a San Francisco 49ers practice in October 2010. Denver gave him full control over the 53-man roster and the decision backfired.

McDaniels returned to the Patriots in 2012, serving as offensive coordinator and quarterbacks coach from 2012-’19. During that time, New England’s offense routinely ranked amongst the league leaders and regularly kept McDaniels at the top of coaching candidate lists.

He agreed to become the Indianapolis Colts head coach in January 2018. After accepting the contract terms and with his introductory press conference set for after New England’s season ended, McDaniels backed out on Indianapolis. Following the stunning move, the team hired Frank Reich.

McDaniels was interviewed by the Browns in 2020 and reportedly drew serious consideration. However, he demanded sweeping organizational changes. Cleveland ultimately hired Kevin Stefanski and the team is headed back to the NFL Playoffs.

Ultimately, barring a person with close ties to McDaniels becoming a general manager, he will likely remain with New England for the 2021 NFL season. There will likely be continued speculation for him as the successor to Bill Belichick, but the team’s issues on offense might also put an end to that.

With so many great coaching candidates available this offseason, all of them having far fewer red flags than McDaniels, it’s understandable why NFL teams are looking elsewhere in 2021.