Some underrated NFL rookies took center stage during Week 2 of the preseason with teams largely resting their starters.

There were some big-name first-year players who performed at a high level such as Pittsburgh Steelers quarterback Kenny Pickett and Buffalo Bills running back James Cook.

There were also two relatively unknown wide receivers who made major statements and are now likely to earn a spot on their teams’ 53-man roster.

Below, we look at six NFL rookies who stood out the most during Week 2 of the exhibition slate.

Los Angeles is widely known for not playing its starters during the preseason under head coach Sean McVay. In many way, this helps otherwise unknown players prove that they can step into large roles when needed. An undrafted free agent out of Montana State this past spring, McCutcheon is just the latest example.

The small-school product drew a tremendous amount of praise from McVay himself following a stellar performance against the Houston Texans Friday evening.

Nothing to see here. Just McCutcheon humiliating a rookie top-three pick en route to catching 5-of-6 targets for 96 yards against Houston. Forget about making the 53-man roster, this kid could earn the right to be in the regular wide receiver rotation for the defending champs.

Related: 5 NFL rookies who could surprise in 2022

As a whole, Buffalo’s rushing attack was on a different level in the team’s blowout win over the Denver Broncos Saturday afternoon. Previously seen as a weakness, this group went for 208 yards and four touchdowns on 27 rush attempts. That’s just absurd.

One of the most-underrated NFL rookies of the cycle, Cook was among the Bills players who stood out as they went for over 500 yards of total offense. He recorded 38 rushing yards on four attempts, including this 19-yard scamper.

Of Buffalo’s group of backs, Cook boasts the most upside. He has a beautiful combination of speed and physicality that will end up working well with Josh Allen in the backfield. His presence will also likely be felt early and often throughout the 2022 regular season.

Related: 5 NFL rookies who could disappoint in 2022

Miami already has its top-three receivers etched in stone in that of Tyreek Hill, Jaylen Waddle and slot guy Cedrick Wilson. However, there’s an open competition for the No. 4 spot as head coach Mike McDaniel looks to provide Tua Tagovailoa with consistent weapons.

One of the more underrated NFL rookies of this cycle, Ezukanma could very well have the upper-hand over the likes of Preston Williams, Mohamed Sanu and Trent Sherfield for that spot.

For good reason. The rookie fourth-round pick from Texas Tech was physically dominating against the Raiders this weekend. That included Ezukanma catching 6-of-9 targets for 114 yards. During his performance, new Dolphins wide receivers coach Wes Welker told the rook “you are here to take a grown man’s job.” Well, that might come sooner rather than later.

Kansas City found both value and need with this former Purdue standout at the end of the first round. Karlaftis proved himself to be a legit threat in his final season with the Boilermakers (10 tackles for loss, 4.5 sacks). However, a questionable pre-draft performance had him fall down the draft board.

Through his first two preseason games, the edge rusher has looked like one of the better NFL rookies this summer. Karlaftis recorded yet another sack this weekend against the Washington Commanders. Thus far this summer, the edge rusher has registered five pressures and two sacks in a mere 31 pass-rush snaps. That’s insanely productive.

There’s every reason to believe that Karlaftis will see a ton of action opposite Frank Clark as a rookie. Kansas City had a major need out on the edge leading up to the draft. It is going to need consistent pass rush threats to overcome a weak secondary. This rookie should be able to provide that. 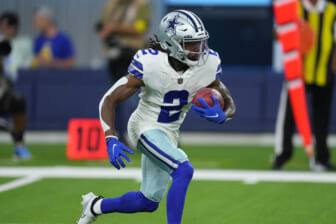 The reigning USFL MVP made a name for himself as one of the most-electric NFL rookies in recent memory Saturday night against the Los Angeles Chargers. Having signed with Dallas this past spring, Turpin’s speed has never been a question mark. Rather, it’s all about whether it could translate to professional football. He answered that in more ways than one.

The kid legitimately returned a kickoff 98 yards and a punt 86 yards for touchdowns. In. The. Same. Game. It has been an extraordinary rise for this former Texas Christian star. He played in both the Fan Control Football League and the European League of Football (both actual things) in 2021 before being a 13th-round pick in the inaugural USFL Draft.

Now, it’s becoming clear that Turpin will not only make the Cowboys’ 53-man roster, but he has earned an ability to handle return duties. The only question here is how offensive coordinator Kellen Moore might use the wide receiver.

This first-round pick out of Pitt was the Steelers’ second quarterback under center Saturday evening against the Jacksonville Jaguars. Pickett followed Mitchell Trubisky into the game, surpassing Mason Rudolph on the depth chart for at least one game.

He saw action on two drives, leading Pittsburgh to a touchdown in the process. All said, the stud young signal caller completed 6-of-7 passes for 76 yards. That included an 11-yard score to running back Benny Snell Jr. and more goodness.

Through two preseason games, it’s starting to look like Pickett is ready to take over for Trubisky sooner rather than later.