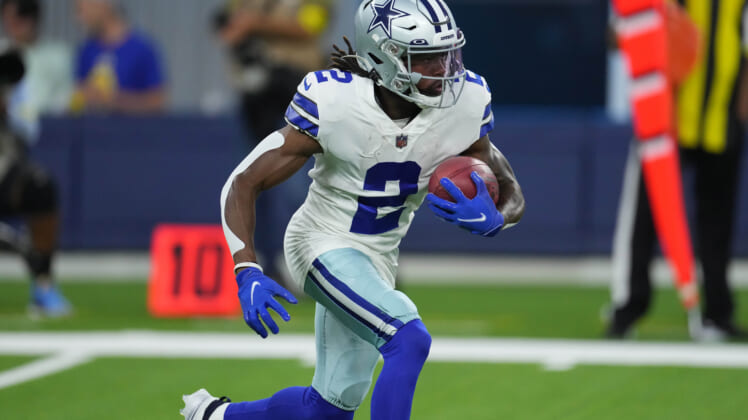 We can’t exactly say new Dallas Cowboys special teams stud KaVontae Turpin came out of nowhere, because that’s not true. For those who tuned into the USFL’s return, they’re likely already well aware of Turpin and what he brings to the table.

For those who wait for the NFL season to begin, they got a full dose of Turpin in the Cowboys’ second preseason game of the year on Saturday night.

Returning one kick to the house is an incredible feat. There’s a reason why they don’t happen every week, and why the all-time record for most kick return touchdowns is held by three players, with just eight scores a piece.

Either way, returning a kick or a punt for a touchdown is a rare accomplishment. That’s what makes them so special.

So when Turpin returned not one but two returns for six in one preseason game, he got the attention of a lot of those within the football community. Many want to know, is Turpin the real deal?

Where did KaVontae Turpin come from?

KaVontae Turpin’s not alone in the fact that he’s had a very unique journey to reach the NFL, when he signed with the Dallas Cowboys this past offseason. Millions may just be learning of Turpin for the first time this week, and it’s possible millions more will learn of his ability during the regular season, but if it weren’t for a shaky college career, everyone may already know his name.

While he was at TCU, Turpin pled guilty in a domestic violence case against his former girlfriend from a situation that occurred in 2018 and he had a prior charge for battery on his record. He was then let go from the TCU program.

NFL teams wouldn’t touch him when it came to the pre-draft process, so Turpin tried to prove his mettle elsewhere. In 2020, he signed with the Frisco Fighters, an indoor football team. In 2021, Turpin joined the Fan Controlled Football league with the FCF Glacier Boyz, and he even went over to Poland to play for the Panthers Wroclaw in the European League of Football.

Once the USFL began play, Turpin entered his name for draft eligibility where the New Jersey Generals took a gamble on him. Wow did that gamble end up paying off.

Turpin went on to win the league’s MVP award for his versatile skill set, catching passes, carrying the ball out of the backfield, and of course, returning kicks.

When the USFL season was over, Turpin had been noticed by NFL scouts who were willing to give him a chance. It was the Cowboys who ended up negotiating a three-year contract with Turpin, allowing him to participate in an NFL training camp for the first time, at the age of 26.

Is the 5-foot-7 Turpin a legit NFL talent?

So Turpin may already have a legion of fans all around the globe, but he’s about to blow up in a big way with the Cowboys.

Standing at 5-foot-7, 158 pounds, at first glance, Turpin may not have the NFL size many seek, but put him on the gridiron against other NFL players, and it’s not hard to see what he can do.

Just from seeing his returns alone, it’s not hard to see Turpin has excellent ballcarrier vision, and keeps his head on a swivel, looking to turn a small return into a big one. No idea what a 40-yard dash would be for Turpin, but we’re willing to bet it’s sub 4.4.

He has incredible quickness and burst and a fantastic ability to change directions, making him an ideal candidate to handle both kick and punt returns. He reminds me of Dante Hall, who was another smaller-framed player with excellent feet and short bursts of speed. If Turpin can come anywhere close to the X-Factor, he’ll have his own nickname soon enough.

Is Turpin legit? He’s the real deal. Expect to see him in the Pro Bowl, or on All-Pro teams for years to come. He’s that good.