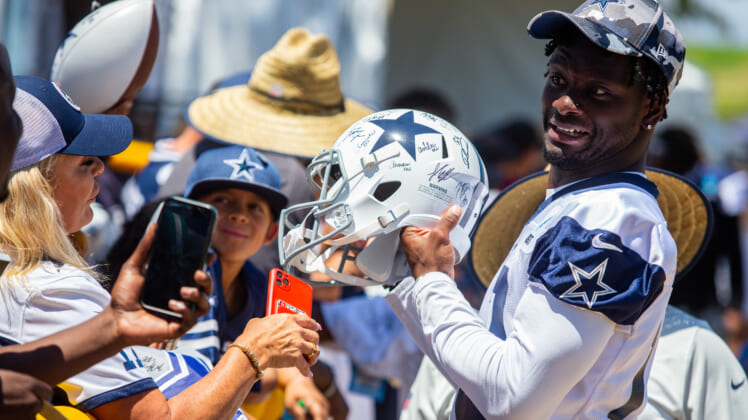 Dallas Cowboys wide receiver Michael Gallup tore the ACL in his left knee late last season on January 2. The long recovery process involved with such a serious injury has always pointed to Gallup missing the start of the season.

To this point, Gallup has yet to practice with the Cowboys as he continues to rehab his knee. But there have been recent signs of progress.

According to Cowboys beat reporter Michael Gehlken, Gallup was able to start running routes at the end of their Thursday practice. It was the first time he was able to run routes since tearing his ACL in Week 16 of last season.

Gallup also was able to catch some passes from Dak Prescott and backup quarterback Will Grier, providing inspiration for his fellow Cowboy teammates during the dog days of summer.

Related: Dallas Cowboys will likely cut ties with Ezekiel Elliott next season, no matter how well he plays in 2022

While this latest bit of news is a good turn of events, it doesn’t impact Gallup’s timeline to return. He’s still on the physically unable to perform (PUP) list. That’s the closest thing to watch over the next few weeks as the Cowboys cut down to 53 players. If Gallup remains on the PUP at cutdown, he’ll automatically miss the first four weeks of the season.

If the Cowboys elevate him to the active roster, it will only be a matter of time before he makes his return to the gridiron. Meanwhile, Gallup still states he won’t be ready for Week 1, but he isn’t sweating it. He’ll be back when he’s back.

We’ve seen Gallup get as many as 1,107 receiving yards, which came in his second year in the league. No one is projecting the fifth-year receiver to match those numbers as he comes off an ACL tear, but his production will be important for a high-powered Cowboys offense.

While the Cowboys could be down on receivers to start the year with James Washington also set to miss time, it’s clear Gallup’s on track to play more than the nine games he suited up for in 2021. Now that Amari Cooper’s out of town, he appears in line for an even bigger role behind CeeDee Lamb. But first, Gallup has to get back to 100%.

Related: Seven-time Pro Bowler Antonio Brown pitches the Dallas Cowboys on a return to the NFL