At one point earlier in his career, Antonio Brown was among the best wide receivers in football. That changed following a spat with the Pittsburgh Steelers and then-quarterback Ben Roethlisberger back in 2018.

Since then, the always boisterous Brown has made headlines more for his off-field antics and social media activity.

It was back in Week 17 of last season that Brown was seen leaving the game for his former Tampa Bay Buccaneers team against the New York Jets. Tampa Bay pretty much moved on from Brown immediately, creating even more drama with the free-agent receiver as the focal point.

We’re not going to hold our breath on this one. Antonio Brown’s comments come mere days after he took to social media with a troubling post that confused the masses. It’s just the continuation of seemingly serious mental health problems involving the former star NFL player.

Did AB just compare himelf to a deity that is worshipped by 2.38 billion people around the globe? That’s a whole lot of fun.

Delving further into Brown’s social media post, he did bring up some previous off-field issues. That included being released by the Raiders after failing to play a single game with the team due to comments he directed at then-general manager Mike Mayock.

Since the 34-year-old Brown forced his way from Pittsburgh following the 2018 season, he’s suited up in all of 16 games. The former Central Michigan star played one game with the Patriots in 2019 before allegations of sexual assault were levied in his direction. He then played 15 games with Tampa Bay prior to that on-field meltdown last season. 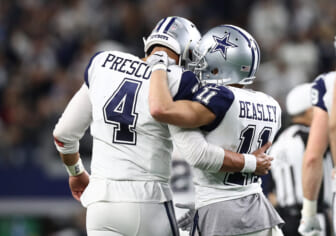 Recently re-signed wide receiver Michael Gallup is slated to miss the start of the regular season after he suffered a torn ACL last season. Free-agent signing James Washington is also out for some time due to an injury of his own.

From a pure statistical standpoint, Brown would seem to be a nice fit for Dallas. As we noted above, he was dominant in Pittsburgh earlier in his career.

This doesn’t change the fact that Brown has been seen as nothing less than a malcontent, creating major issues over the past several years.

It was back in 2018 that Brown said that his NFL career was over as he turns his focus to a “music career.” This came months after Brown indicated that the Buccaneers intentionally tried to hurt him while calling out a quarterback in Tom Brady who had gone to bat for him many times.

Former Buccaneers head coach Bruce Arians is among the most-respected figures around the NFL. Brady himself is considered GOAT. Burning your bridges with those two isn’t going to do an enigmatic favor such as Antonio Brown any favors. That’s for sure.