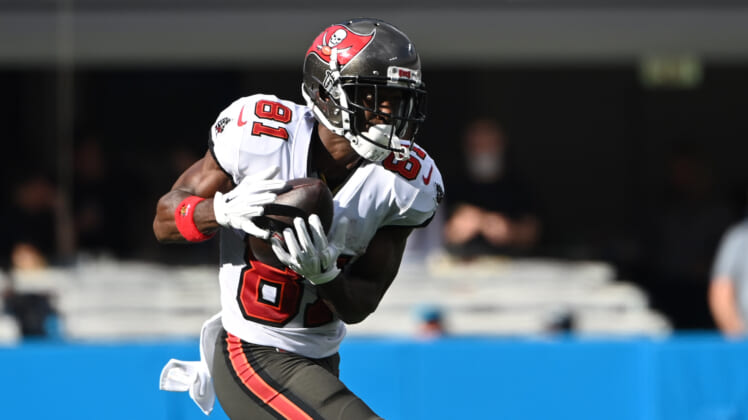 Tampa Bay Buccaneers wide receiver Antonio Brown took his jersey off and threw it into the stands before abruptly leaving Sunday’s game against the New York Jets.

Late in the third quarter with the Buccaneers’ offense driving downfield, television cameras spotted Brown taking his uniform and shirt off. He tossed it into the stands, giving it all away to fans, before making his way towards the tunnel.

As he walked into the opposite end zone, Brown waved to the fans in attendance and gave some high-fives. Once he got to the tunnel of the entrance, the Pro Bowl wide receiver ran off to the locker room.

Footage from a fan shows teammate Mike Evans trying to help Brown calm down, but the effort isn’t successful. Tampa Bay’s No.2. receiver continued screaming towards someone on the Buccaneers’ sideline before making a dramatic exit.

Brown just returned to action in Week 16 after serving a three-game suspension for providing the NFL with a fake COVID-19 vaccination card. Days before returning from suspension, there was still doubt regarding whether or not head coach Bruce Arians would allow him back on the team.

Fittingly, Brown’s stunning and theatrical departure comes just days after he blasted reporters for focusing on the “drama” of his vaccination status and not football.

Brown was already on thin ice with Arians, with Tom Brady‘s support being the only reason he remained on the roster. It’s fair to think this might be the last time Brown plays for the Buccaneers.