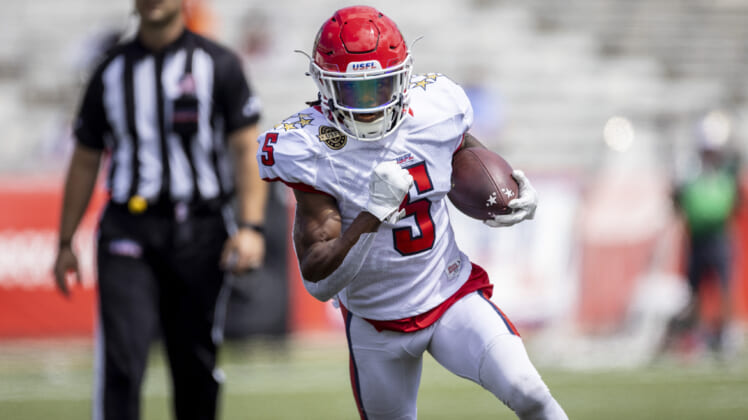 KaVontae Turpin is becoming a star before our eyes in the USFL. Coming off winning the league’s MVP award, Turpin’s New Jersey Generals are taking on the Philadelphia Stars in the first playoff game of the USFL reboot in 2022.

Trailing the Stars 10-7 in the fourth quarter, Turpin took the field on fourth-down for the ensuing punt. That’s when the electrifying wide receiver/return man changed the dynamics of the game.

In response to All-League punt returner KaVontae Turpin’s house call, the USFL All-League kick returner Maurice Alexander just responded with a touchdown of his own.

Alexander took the punt 88 yards for the score, which is the longest return in the USFL this season, putting the Philadelphia Stars up 19-14 in the fourth quarter.

KaVontae Turpin is doing things in the USFL we just haven’t seen from other football players in the league thus far. Not only was the 25-year-old receiver the only player to return a punt to the house during the USFL’s 10-week regular season, but now he’s become the first to get a punt return touchdown in the playoffs as well.

As mentioned, he earned the USFL MVP trophy for his performance throughout the regular season. Here were KaVontae Turpin’s stats on the year.

Before Turpin was taking the USFL by storm with the Generals, the 5-foot-9 receiver went to TCU, where he also got off to a hot start in his freshman year, racking up 649 receiving yards and 8 TD catches, but he could never build off his initial success.

Turpin was eventually dismissed from the team in 2018 and later pled guilty to assaulting his girlfriend, which undoubtedly impacted his career. He was then banned from participating in TCU’s Pro Day, opting to hold his own.

Still, he never received an opportunity with the NFL, but Turpin still had a dream of playing football, landing with the Fan Controlled Football League in 2021, before moving onto the Spring League, and eventually playing in the European League of Football.

When USFL tryouts were taking place, Turpin showed up and apparently impressed enough to get drafted by the New Jersey Generals. Now, the embattled receiver’s next stop could be the NFL, especially if he keeps performing as one of the best players in the USFL.