While Travon Walker was rarely in the discussion for who might be the top pick at Thursday’s 2022 NFL Draft, he is the current betting favorite to be taken with the first overall selection

For the last few months, defensive standouts like Aidan Hutchinson and Kayvon Thibodeaux, or talented offensive linemen in Evan Neal and Ikem Ekwonu have been at the forefront of the top pick conversation. However, that has changed in recent weeks and Georgia EDGE rusher Travon Walker has jumped to the front of the prospect pack, and for many betting sites he is the favorite to be drafted first at tonight’s event in Las Vegas.

Sportsbooks site SportsBettingDime has cultivated the numbers from various betting sites, and Walker is a popular pick with his highest odds being -220 on Caesars Sportsbook and as low as -150 on FanDuel. Behind him in the top pick betting lines are Hutchinson at +160 average, Ekwonu with +800, and Neal at +1600. The Jacksonville Jaguars will be the team picking first in the 2022 NFL Draft, as of now.

Related: Sportsnaut’s 2022 NFL mock draft – Projections and analysis for the first round

After Travon Walker, Malik Willis will be first QB taken in 2022 NFL Draft

Another question many are wondering about heading into the NFL Draft, which kicks off at 8 PM ET, is who will be the first quarterback taken. QB is the most important position in the league, and even with a weak draft class — like this one is — college football’s best signal-callers are still expected to go high in this year’s event.

On Thursday morning, Malik Willis is a -140 favorite to be the first QB taken off the board in 2022. The Liberty passer has been a top choice to be selected first for months, and it doesn’t seem like there will be any surprises on draft night. He is also the first QB taken on our mock draft as well.

Behind him in the odds pecking order is Pittsburgh QB Kenny Pickett at +150, then Cincinnati’s Desmond Ridder — not Matt Corral — with the third-best odds at +1000. Ole Miss’ Corrall has the fourth-best chances with +1400. 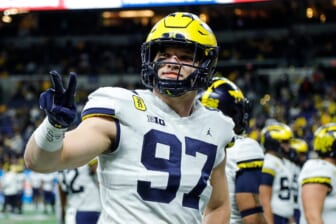 Also Read:
Jacksonville Jaguars split over who to take No. 1 in the 2022 NFL Draft

When it comes to the rest of the top-five picks, the betting lines see Hutchinson going second to the Detroit Lions, Ahmad Gardner being the Houston Texans pick at three, Kayvon Thibodeaux being taken at four by the Jets, and Ikem Ekwonu going to the other New York team in the Giants at five.